One of the final challenges in my first year of beekeeping was the winter oxalic acid treatment for varroa. I’ve just done the trickle method. I chose this over vapourisation because I’d read so much about the potential risk of exposure to the gas. I didn’t have any vapourising equipment and besides, it all looked a bit, well…complicated. A solution of crystals seemed more manageable but like so many other activities, it didn’t come easy.

Calculating the amount of Api-bioxal to use was difficult because I’m not good with numbers. The smallest sachet contains 35g, enough for 10 hives, but I only have two and everywhere I looked, the advice on quantities seemed to differ. Eventually, with help from Patrick, I  weighed out 7 g and mixed it with 100ml of sugar syrup. 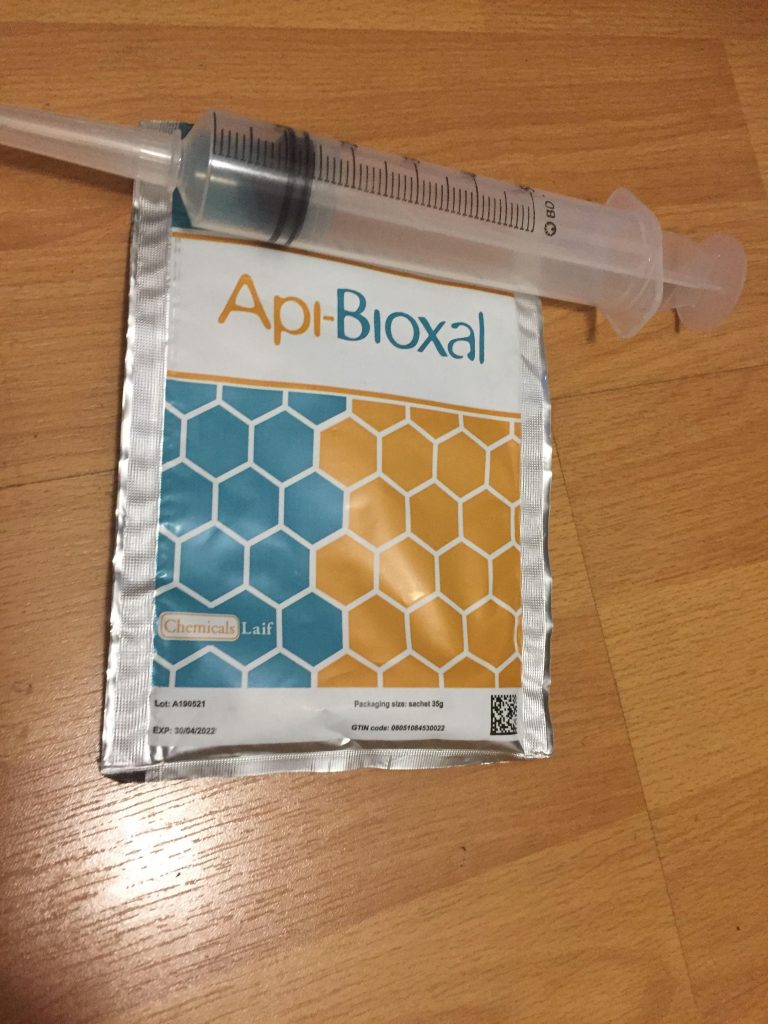 I wasn’t sure how much to cool the syrup and afterward, I read it should be at room temperature. It might have reduced to that by the time I arrived at the allotment on a cold, albeit sunny day, but with hindsight, I worried the solution was too warm when I added the crystals. Next year I’ll know better.

The syringe was another challenge. I don’t recall ever filling one before and my lack of knowledge proved to be embarrassing, to say the least. Firstly, I forgot to put on the cap so the first attempt at filling trickled onto the floor. With the cap added, and the syringe refilled, it was difficult to push down the plunger. I pressed really hard, the cap shot off across the apiary and the floor was treated again. 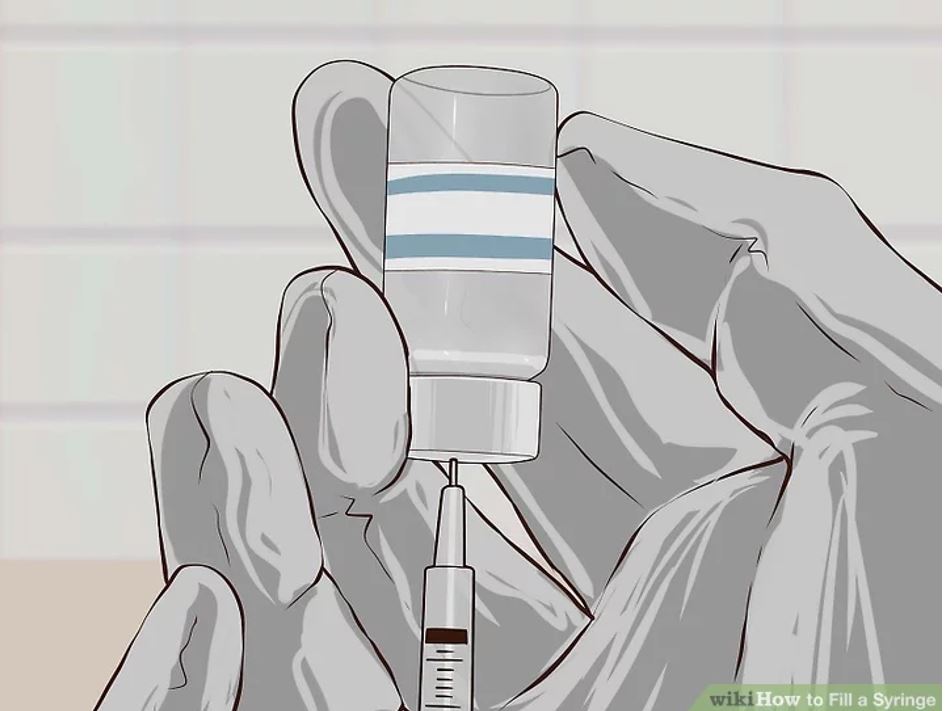 You’re probably thinking the obvious by now. Doesn’t she know how to fill a syringe?

It wasn’t until I was describing my problems to Patrick that I realised the clue is in the name – you syringe the solution up, but at the time I hadn’t worked this out!

After the third filling attempt, with the amount in my flask rapidly decreasing, I lifted the crown board and was delighted to see so many bees on the top of the frames. All the guidance says trickle between the frames, but with few visible gaps, I dribbled the solution over the bees instead. They didn’t seem impressed. I’d forgotten to bring a mask and was wearing fingerless mittens but was thankful to have a veil as they were up and on me.  As there were no stings, I think this was more in protest than anger.

Everyone says winter is the time for reading, making frames, and watching videos, with the management of the bees taking a back seat. During November and December, I’d struggled with the absence of hands-on contact. It was hard not to have the visual reassurance of knowing they’re ok, so I’d been looking forward to getting a peek under the crown board.

When I set them up for winter, I fitted mesh over the crown board holes. I’d read the bees will propylise them if there’s a draught. Each colony had begun to do this – so neatly – and then stopped. What did it mean? Was there half a draught? As always, there seemed more questions than answers!

It was reassuring to see the pink hive so full of bees but the brown hive, as always, was a different story. The pink colony was still taking in pollen in October whereas the brown had been much quieter.

The difference between them was confirmed when I checked the varroa boards after the treatment. It was clear the brown bees were only in the first 3-4 frames whereas the pink were spread more across the hive.

Patrick said he’d worry less about the brown and more about the pink, as this suggested they were eating all their stores. I couldn’t take out the frames to look, so gave them an extra box of fondant just in case. Knowing I have to wait until spring for a closer look is hard.

With the trickle treatment over, and having some visual reassurance the bees were still alive, it’s now a case of settling down to wait for spring. Winter is a time for looking back and reflecting. When I began this journey, I had the expectation there was a right way to do beekeeping. It’s taken time and tears to realise each colony is unique and every beekeeper has their own way of working.

To become proficient requires learning what’s best for your bees and this will take into account variables like the weather, surrounding foliage, and annual nectar flows.  It’s also about working out your own philosophy as a beekeeper, for example, are you more comfortable having a sense of control and need to manage the process, or can you relax and trust the bees to know what to do.

My first year has also been complicated by Covid and the need for social distance. Although beekeeping is technically classed as husbandry, I’ve missed the Association meetings, courses and open days. Problems were dealt with primarily via text messages and video calls and there were no opportunities to visit other apiaries and share practical experiences face-to-face.

I don’t think I’ve ever experienced such a steep learning curve, but all through this first winter, I know it’s just the beginning of the journey.  I can’t wait for the better weather and the opportunity to do it all over again in 2021.

2 thoughts on “Winter is here”