My bees arrived in April. By June, one colony was rebuilding itself after a swarm while the other had mysteriously lost its queen. I’d carried out a queenless split but only one hive made a new queen, so I merged them back together. For the time being, I had two queenright colonies, so was back where I started from. All my plans for expansion this year were not happening.

By now my mentor Patrick had taken on a second out-apiary which was situated in an orchard. It was an idyllic environment, one which reinforced the magic and beauty of keeping bees.

I still loved the whole process, even though it wasn’t turning out quite as I’d expected.

Patrick continued to be encouraging and reassured me there was still time for the bees to settle and create stores. I added supers to my new colonies, having left this too late the first time around. However, the bees seemed to be ignoring them so for the next few weeks, I continued with inspections of the brood boxes. The queens were doing well, and laying down stores as well as expanding frames of capped larvae. All seemed to be going okay but my lack of experience was about to show itself again.

I noticed the pink hive seemed to have less in the way of larvae and dutifully wrote this down in my records but didn’t take any action. It took another week for me to begin to suspect this colony might be queenless again.

I couldn’t believe it was happening for a second time.

Why were the pink queens disappearing and, more importantly, what should I do? By now it was July and I didn’t feel confident to disrupt with another split. The online forums were talking about harvesting box after box of honey while I felt I hadn’t really got started. The learning curve had been steep but seemed to be more about recovering from disasters than anything else.

In the meantime, I needed to do get the pink colony queenright again. The brown hive was doing well after the swarm. They were drawing out some frames in the super, and even though they weren’t filling them with stores, they seemed active and healthy. I made the decision to take a frame of eggs and young larvae from the brown colony and donate them to the pink one.

Once the transfer had been bone, there was another period of waiting. I seemed to have spent more time closing the hives than going in and inspecting. It was August before I finally dared to open up the pink hive to see if the transfer had worked.

They had successfully reared a new queen who was prolific. When I looked there were several frames full of capped brood, including one with a beautiful heart-shaped design.

By now I was using a camcorder to record the bees. Taking still photographs was something I’d done all along but recording inspections was a different experience. I loved going home and rewatching what had happened. During this time I was lucky enough to film a bee emerging from its cell. Total magic and I could watch it forever!

The disadvantage of filming was I had to remember to also take still pictures. Taking an image from the video was not always as sharp in focus as shown in the photo below. Like everything to do with beekeeping, there was a balance to be found!

By the time the pink hive had requeened,  I’d looked back over everything I’d learned in a few short months. One of the most important lessons was the value of leaving the bees alone. They seemed to be doing better for not being disturbed and I was wondering if there was any connection between opening them up for inspection and the problems I had keeping the queens.

For me, in these early days, the weekly visits had been the highlights but was there a possibility that going in and disturbing them was detrimental to the colony’s health? It seemed there was a fine balance between inspecting to check everything is going okay and leaving them to develop and grow in a healthy way on their own.

The forums were now referring to preparation for winter. 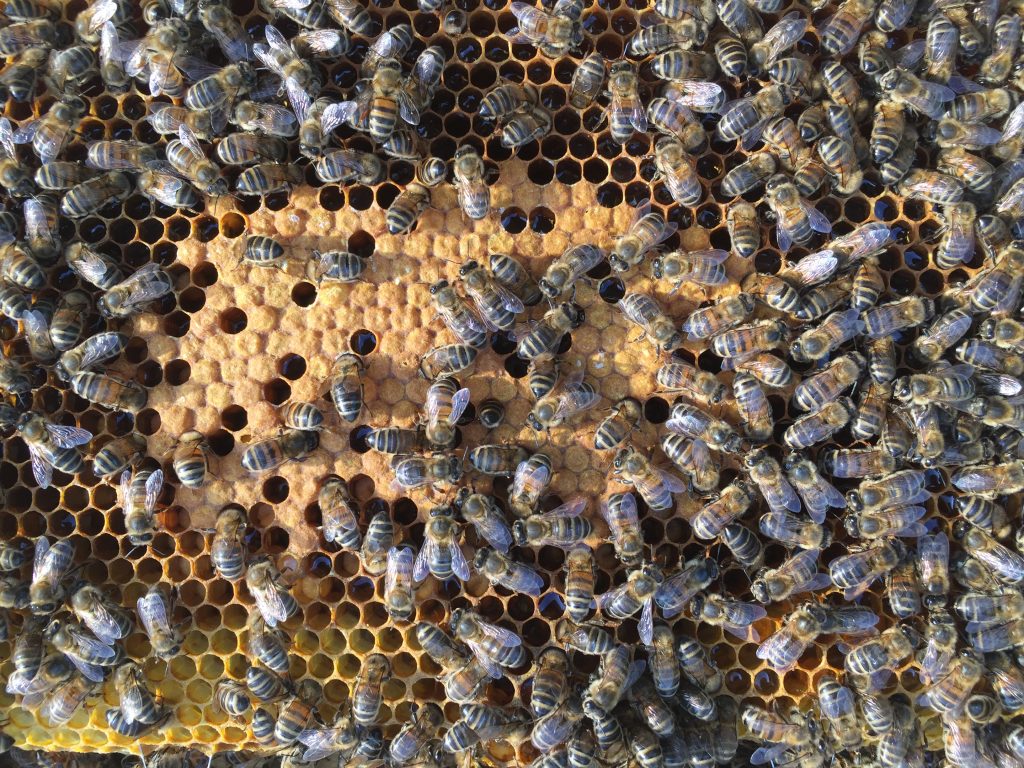 It was still August but I had a new set of lessons to learn. What and when to feed plus the treatment of varroa being the primary ones. There was so much debate on the online forums about both. With regard to varroa, the topics were first, whether to treat or not, and second, which method to use.

The next post will cover the decisions I made and how I set about making sure both colonies went into winter in the best possible way.