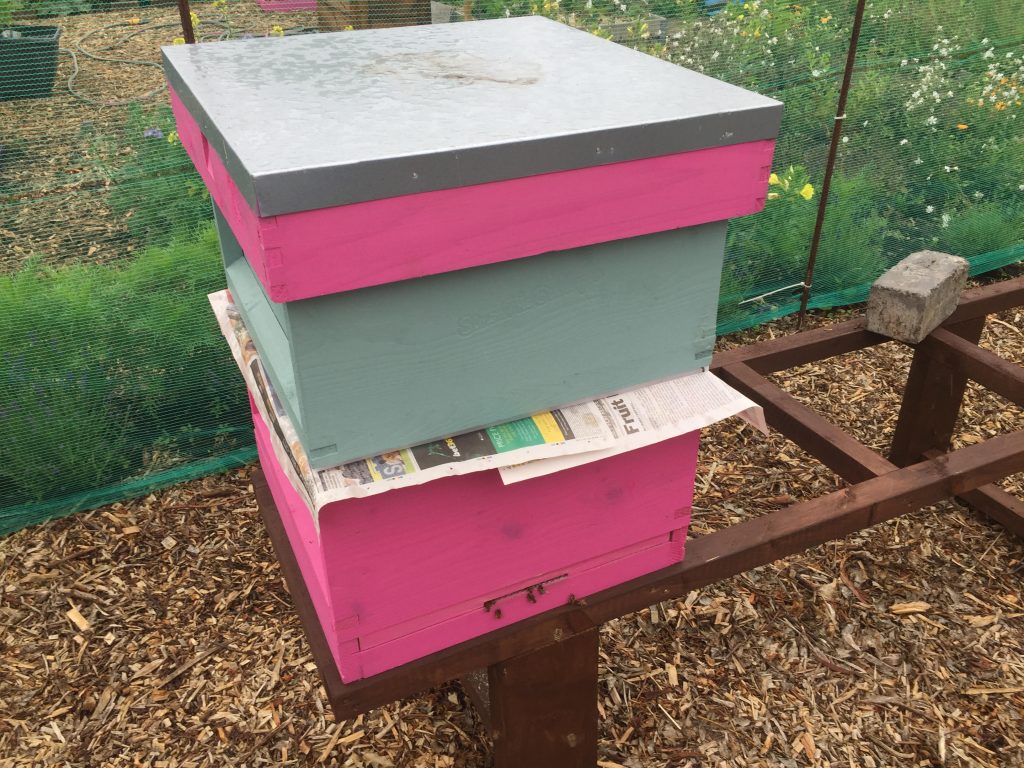 By now I’d had my bees for 10 weeks. While other newbies seemed to be making new colonies and adding supers for all the honey their bees were making, I was trying to keep both my depleted hives healthy and queenright.

My immediate problem was the queenless state of the green girls. After the split, the pink ladies reared a new queen who’d mated and was successfully laying. It was one of those rare occasions where the bees seemed to be following the book. However, things were different in the green hive.

Although they’d been given the same number of frames and queen cells as the pink ladies, the green girls remained queenless. I wasn’t sure what had gone wrong or at which stage. Had they reared an unhealthy queen or had she gone on a mating flight and not returned? I had no idea but knew something had to be done quickly. The workers were continuing to forage and fill cells with pollen and nectar, but with no new brood to replace them, the colony was gradually shrinking, and would eventually fade away.

There were a several options. I could introduce a new queen from a different apiary, transfer a frame of eggs and young larvae from a different hive, or merge the failing hive with a healthy one. At this stage, I didn’t want to risk any possible rejection of a new queen, as this would set me back in time yet again. The brown hive was still building itself up after the swarm, so I decided not to borrow any doner eggs. The best option appeared to be a merge between the green girls and the pink ladies.

It reinforced the value of having two hives. If something goes wrong with a single hive few steps can be taken to rectify the situation. At least with two, there was always the possibility to split, merge, or transfer.  I read up on merge methods and the most popular seemed to be literally place one brood box on top of the other with a layer of newspaper in between.

The purpose of the paper was to give each colony time to get used to the ‘smell’ of the other. The bees have to tear their way through the paper, which allows for a gradual mixing of the different smells and climatises the new bees with the original ones. Some beekeepers make a few slits in the paper to get them started while others don’t bother.

Assisted by eldest son, we opened the green hive again and was struck by the silence. No bees came up to see what we were doing. Instead they totally ignored us, literally keeping their heads down inside the cells where they were creating stores. The books suggest queenless colonies can become aggressive but this wasn’t my experience. The bees were quiet and calm. I know you shouldn’t anthropomorphise animals or insects, but it was hard not to think of them as being sad.

By contrast the pink hive was literally buzzing. The new queen had quickly settled and was busy laying and the frames of capped brood reassured me a merge between the weaker and stronger hives was the right decision. We quickly laid the paper, made the slits, covered it with a queen excluder and placed the green brood box over the top. 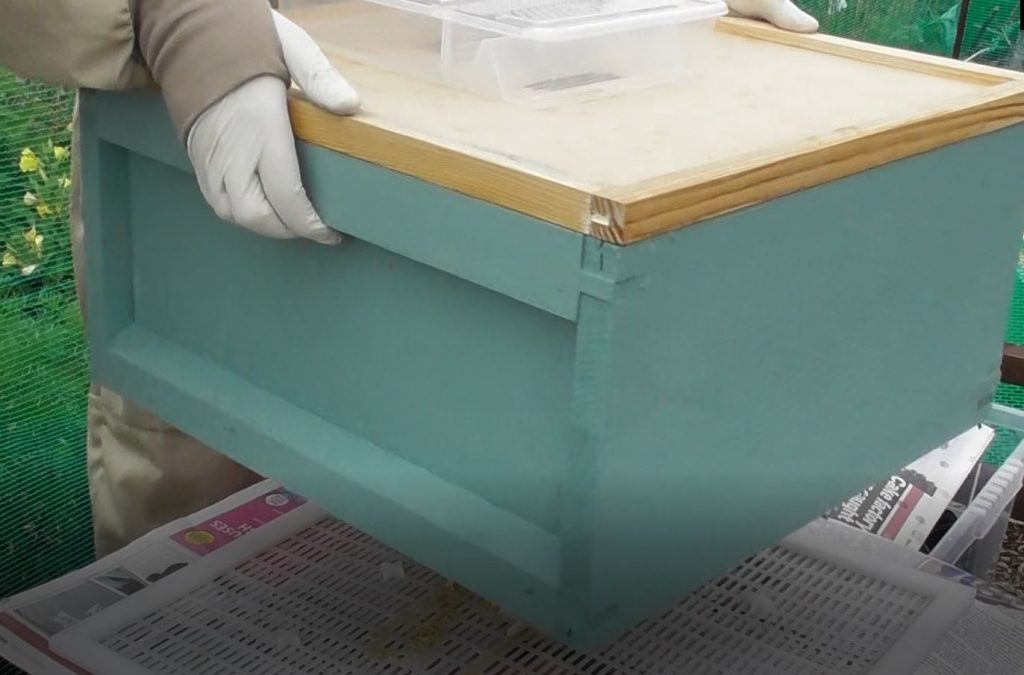 Traditional advice is to leave the bees alone for anything from two days to a week. Some say look for bits of chewed up newspaper in the entrance but I saw no sign of any. In the end, wet weather meant the were left for just over a week, which was longer than I intended.

I’d left the queen excluder holding down the newspaper layer, without realising this meant drones in the upper box would be unable to squeeze through to get to the exit. When I finally lifted the lid, a crowd of drones were more than ready to leave through the hole in the crown board.

It was clear the bees had successfully chomped their way through the newspaper layer, mostly over the area of the brood nest. So far so good. 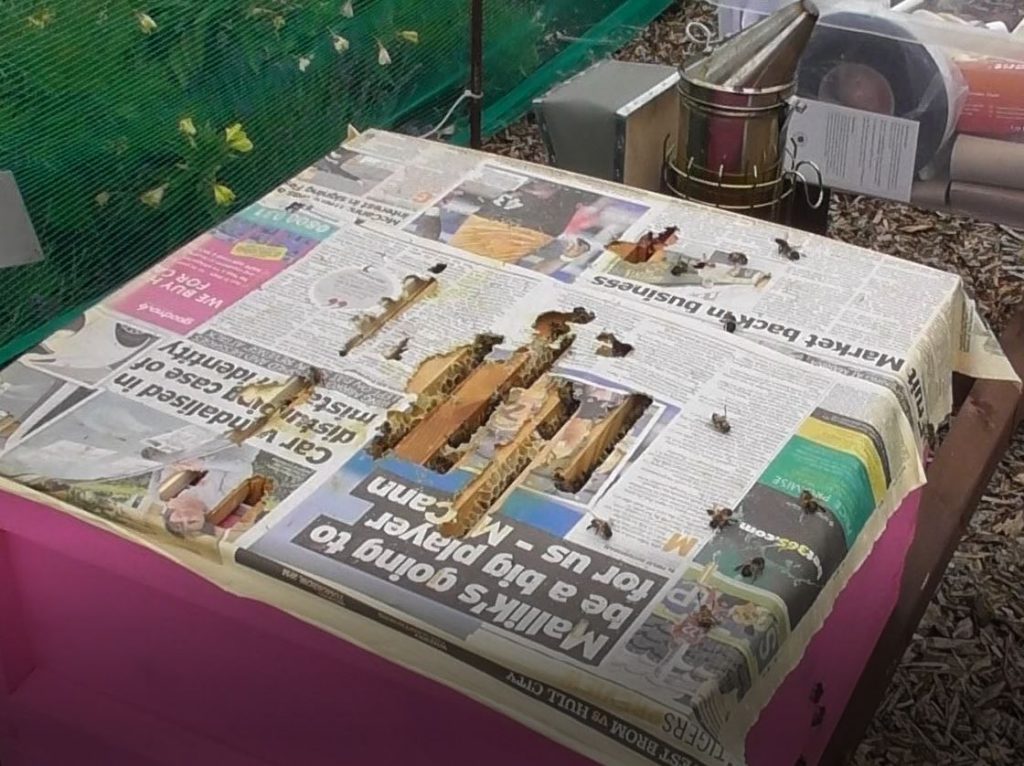 All that remained to be seen was the state of play with regard to the pink queen and her work. The good news was they’d drawn out all but three of the frames, and were continuing to cap frame after frame of brood. 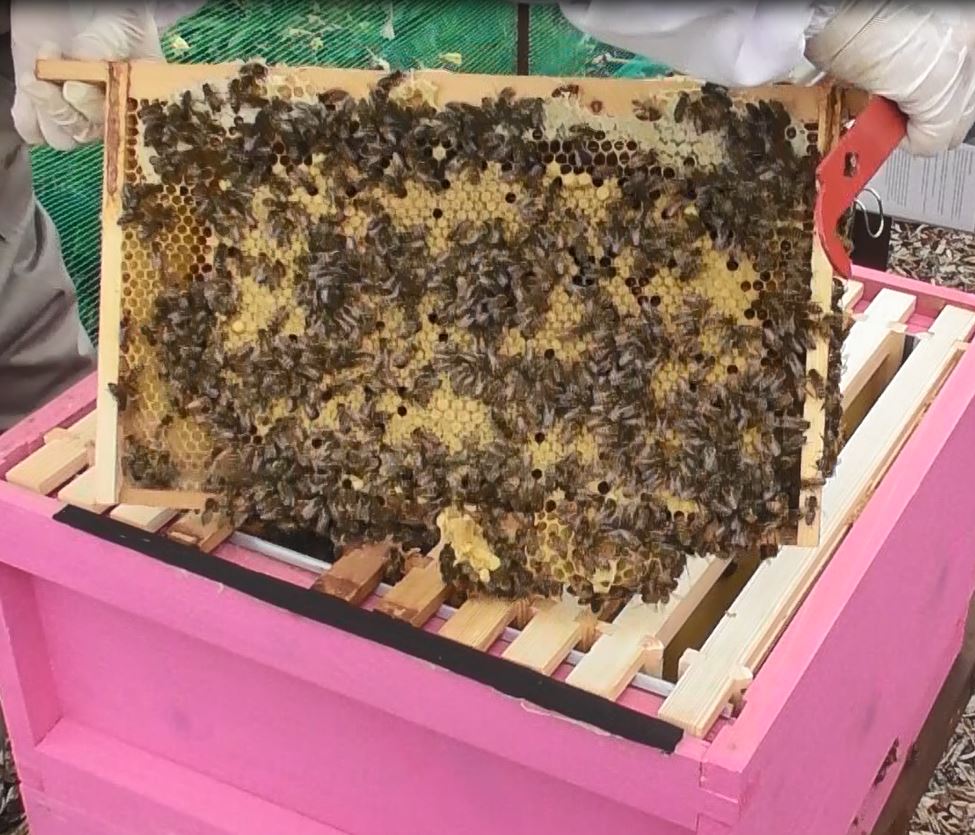 For the time being, I’d returned to having two queenright colonies, so was back where I started from. To say it had been a baptism by fire was an understatement. I was feeling relieved but there was one more calamity to come. The next post will cover what happened when the new, and so far prolific, pink queen mysteriously vanished. 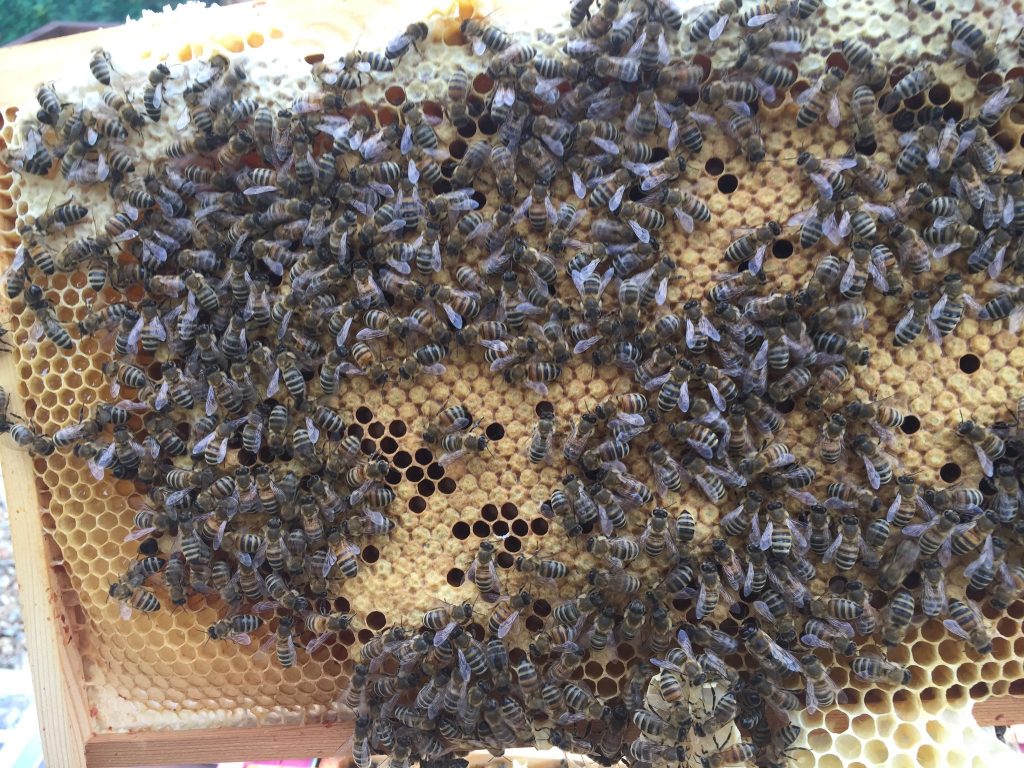