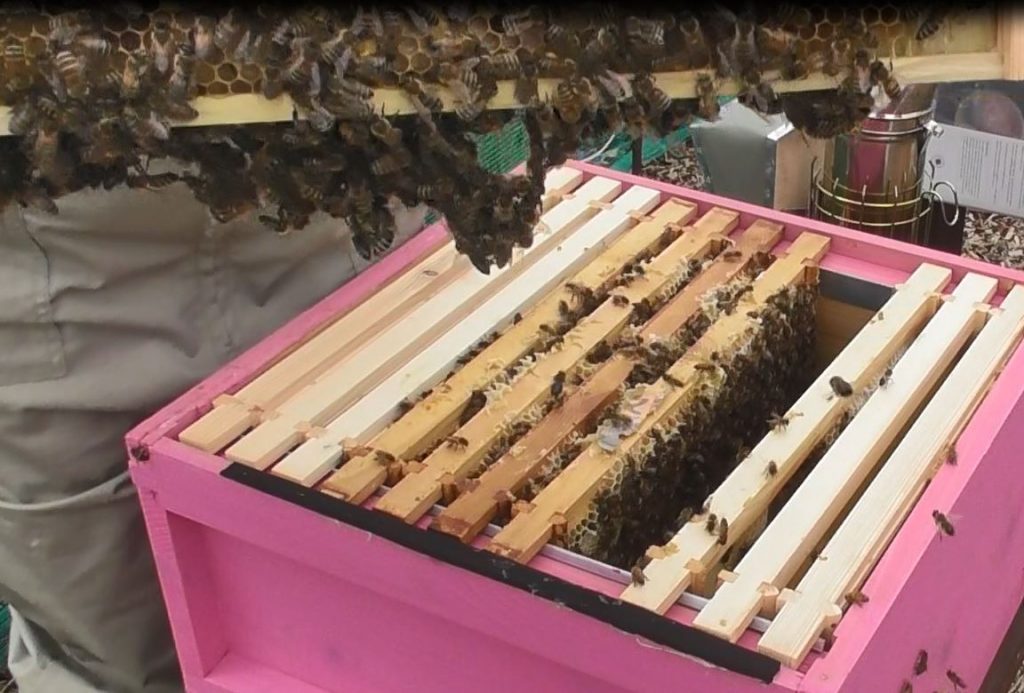 My apiary was growing. I now had three hives and I was on target for ending the season with four colonies. Although I’d had the setback of a swarm from the brown hive, and had to carry out a queenless split in the pink one, all seemed to be going well.

Waiting for the bees to establish new laying queens seemed to take forever. I returned to my bee books to try and understand more about life from a bee’s point of view, in particular the way in which colonies reproduced themselves and remained viable.

During this time I wondered if  I was partially to blame for the brown hive swarm and queenless state of the pink hive. Patrick had said I’d go in too often at the beginning, but it’s almost impossible not to. You want to check they’re doing all right, but also you just want to see them. Opening a calm hive on a hot day, seeing the sun shine off their perfect amber and gold striped abdomens, and the fascination of life inside a brood box, is an irresistible combination. However, there’s a price to pay for disturbing them.

Estimates differ (as in all things to do with beekeeping) but there’s general agreement  an inspection can set a colony back several days, if not longer, and it takes time for them to recover. Maybe my enthusiasm had got the better of me, and I’d opened a hive too often for family and friends. Or maybe not. I would never know. All I could do was consult Wally Shaw’s brood development charts and count the days until it felt safe to re-inspect.

Beccuse my fledgling confidence had taken a hit, I asked Patrick to help. It was vital to find evidence the colonies were queenright again, and I felt I needed more experienced eyes. 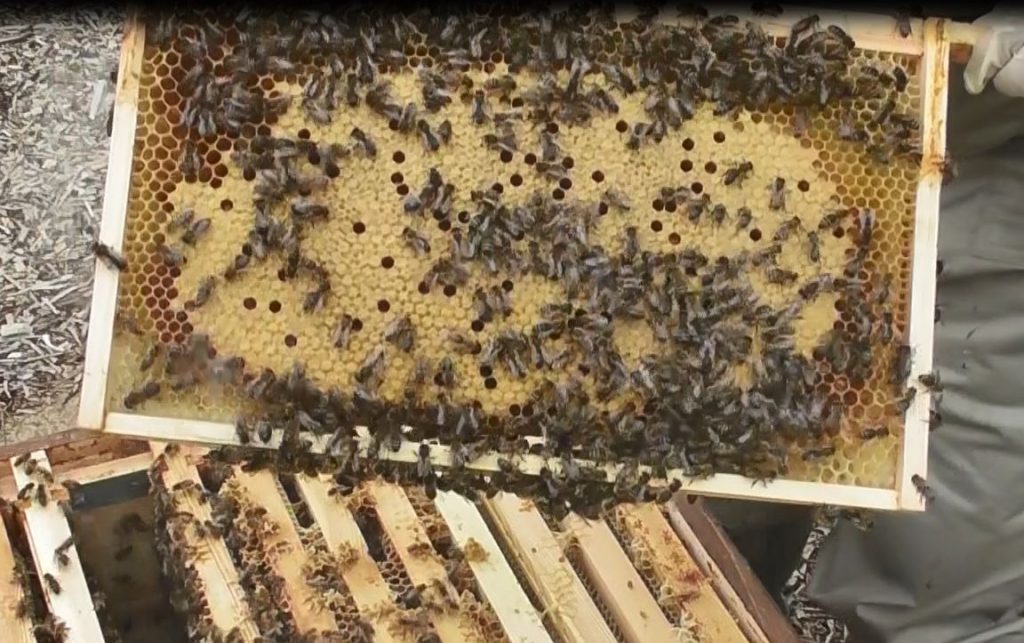 We began with the brown hive girls. They’d reared a new queen and it was a huge relief to see she was busy laying. The frames contained lots of capped brood and, although there was an absence of capped stores, the weather was fine, the nectar flowing and they were busy bringing in leg-loads of pollen.

It was a similar story with the pink ladies with the presence of capped brood and eggs. This time I could also see capped stores. By the time we got to green girls, I was feeling happier. This, my most recent aquisition, was housing the other half of the queenless split. If the pink hive could rock and roll, I had no reason to the green would be any different. 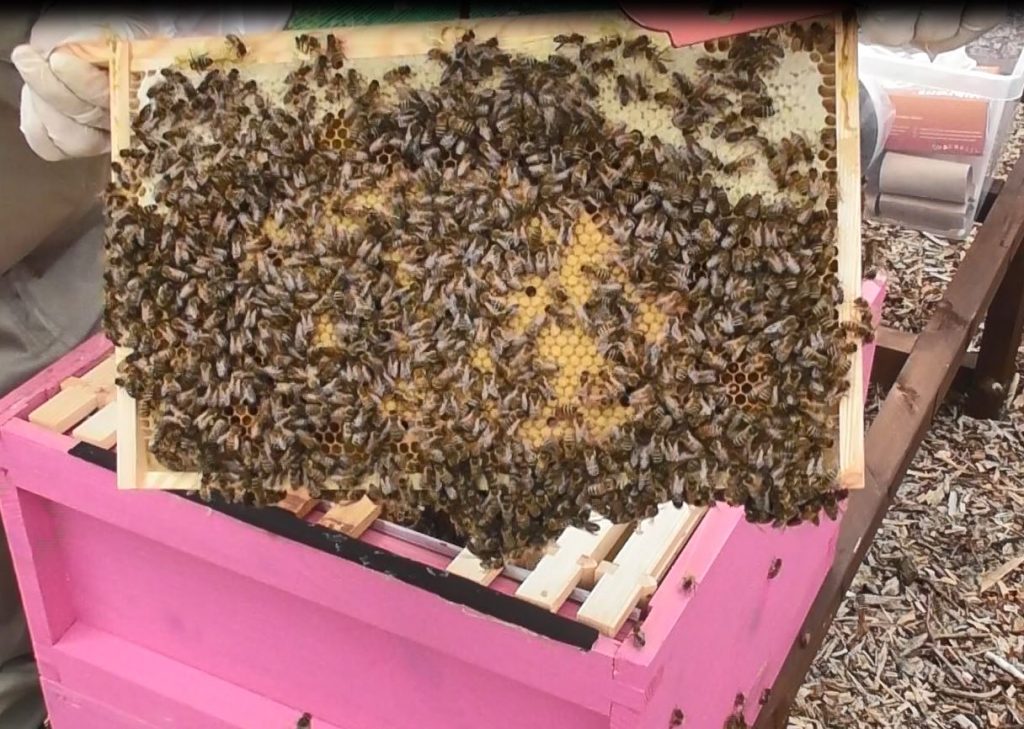 We couldn’t see the queen, which in itself is not uncommon, but even Patrick’s beekeeping eyes, found no sign of eggs. For most things in life I’d consider ‘two out of three ain’t bad‘, but when to comes to colonies of bees, it doesn’t apply. We decided to give them a little more time, just in case.

A week later I returned to inspect, with a plan in mind. If the green hive was still queenless, I’d merge it back with the pink.

This is one of the huge advantages of having two or more hives. When things go wrong, options  such as splitting, merging, or transferring frames with eggs from another hive for them to raise a new queen are available. However, in this case, the latter was not an option. Both the pink and brown colonies were busy rebuilding themselves, ao although I was still hoping to find the green hive was queenright, I’d also looked at how to merge a weaker with a stronger colony, using sheets of newpaper. 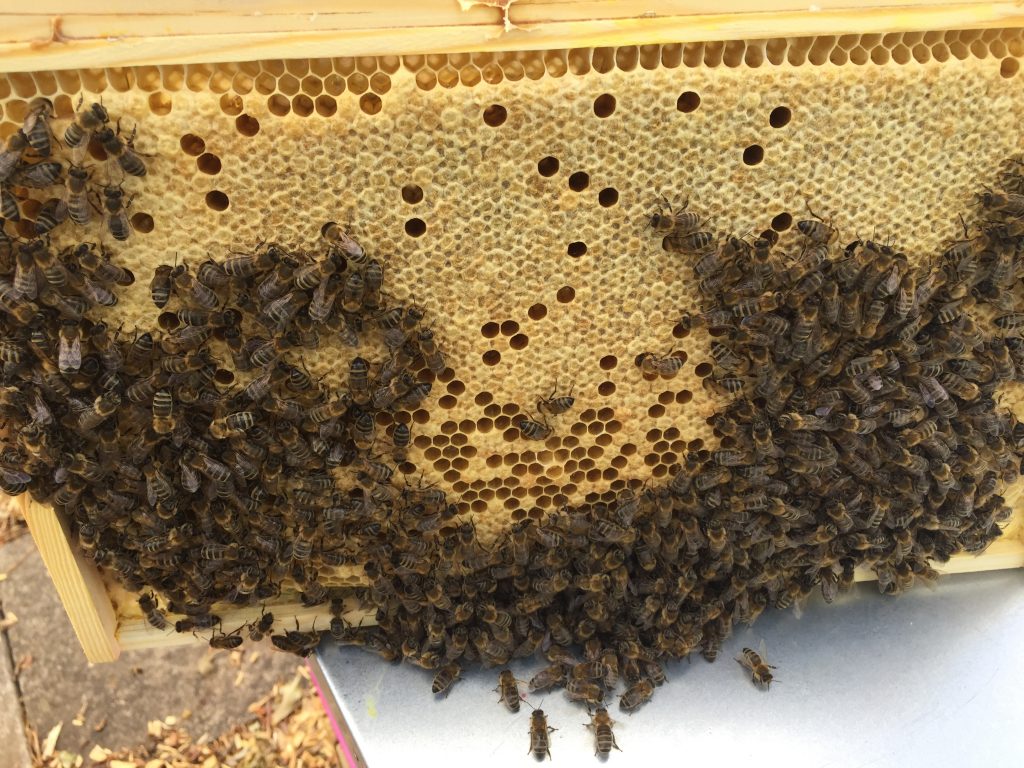 The books say a queenless colony becomes agressive, but this wasn’t my experience.  As soon as I opened it up the green hive, I knew there was no queen. The number of bees had dwindled, and while those present were scurrying around keeping busy, what struck me most was how eerily quiet they were. 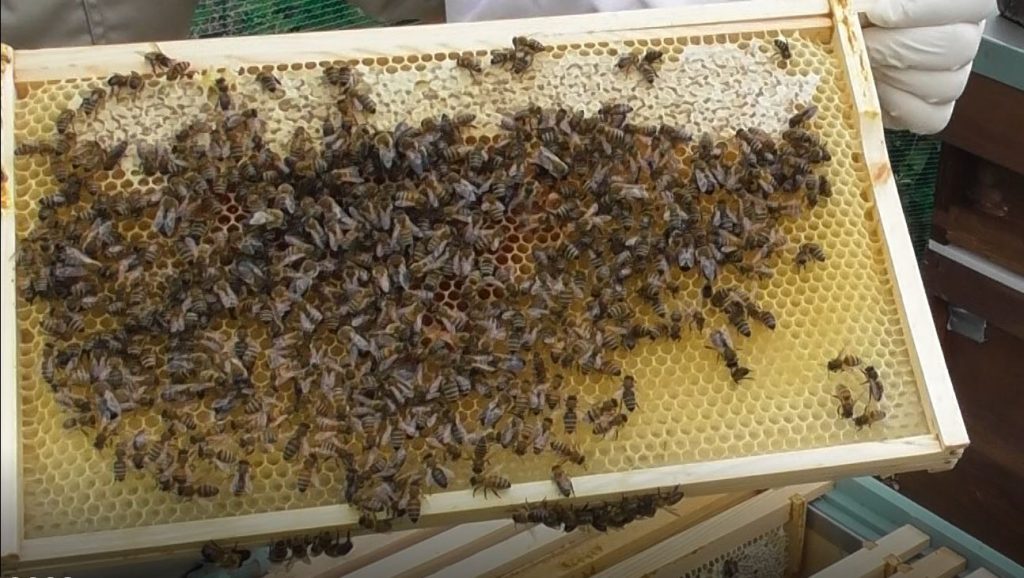 I know you shouldn’t anthropomorphise animals etc, and give them human qualities, but I really had a sense they’d given up hope. In a queenless hive, the continual cycle of reproduction is halted. Summer bees only live for approximately six weeks, so as existing bees come to the end of their life, with no more taking their place, it doesn’t take long for a colony to die but it’s a gradual process. The green girls were doing what they were programmed to do, and were busy collecting pollen and nectar, storing it in the frames, but all the fizz and excitement of a healthy hive was missing. They were fading away and it was really sad to see. I thought the swarm was a low point, but it’s usually a healthy experience for the bees. This was different and I knew I had to do something to save them.

However, it was still ridiculously easy to make mistakes as the next post will show. The process of merging the green hive with the pink took longer than planned, due to some unseasonal weather. Unwittingly, I ended up trapping all the drones inside the top box, and they had no means to escape. The steep learning curve was continuing.

4 thoughts on “Inspecting after the swarm and the split”