Asian Hornets are a day flying species. European Hornets will fly after dusk.

Early in the year the Asian Hornet feeds on nectar (carbohydrates) but later on when it is raising it’s young it need protein. It gets these from the wing muscles of insects especially of honey bees. A hive of bees represents a concentrated source of food so the hornet doesn’t have to go a lot of chasing. Unfortunately a large nearby nest of hornets can destroy a honey bee colony in hours!

In the Spring the over wintering Asian Hornet queens ‘wake up’ and set up ‘primary nests’. These nests are a weak point in the hornets life cycle as they can be removed stopping further development of the larger ‘summer’ nests. It is a small (tennis ball/grapefruit size) and found in protected places like sheds, porches, lofts, bushes etc. Watch the nest from a distance to make sure it’s not a wasps nest and take a photo. If you really think it’s an Asian hornets’ nest or an Asian Hornet you need to inform the authorities. Please inform the NNSS at alertnonnativ@ceh.ac.uk. or the National Bee Unit at York or us at Beverley Beekeepers you must send photos and them with your reported sighting. Don’t touch a nest or the hornets may attack you! If you see a free flying insect try to note which direction it was flying in. This gives a hint as to where the nest might be. Queens leave this small nest and set up secondary larger nests. It is the hornets from these nests that attack honey bees. 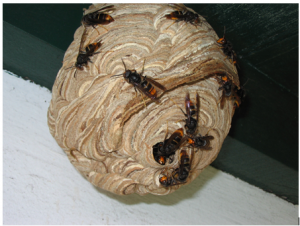 The ‘summer’ nests are bigger and higher, usually in trees but not easy to see because of the leaves. These nests contain hundreds or thousands of hornets that prey on honey bees. At this time of year they need the protein from the bees wing muscles to feed their young. If you see one of these nests later in the year note its position, take a photo if possible and tell the NNSS. If you see an Asian hornet report it as well. If you capture an Asian Hornet put it in the fridge in a match box. The authorities will want to see it. 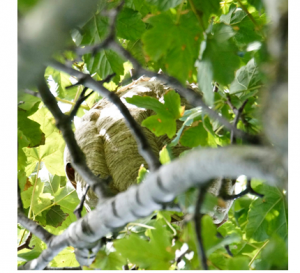 A large summer nest up in a tree. They are not easy to spot.

Don’t try to remove nests yourself, they are dangerous!