The Asian Hornet  or Yellow Legged Hornet (Vespa velutina nigrithorax) currently found in Europe is one of 13 subspecies of the Asian Hornet found Asia. 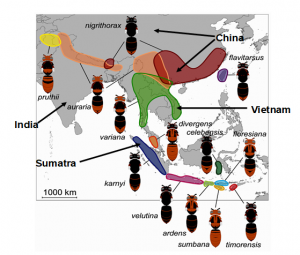 This diagram shows the subspecies of the Asian Hornet in Asia. You can see that the Yellow Legged Hornet (nigrithorax) is one of 13 subspecies.

The Asan Hornet invaded Europe from Asia in 2004, not by flying  but by being transported to southern France by a cargo boat from China. Once in Europe it has spread by hitching  rides (cars, caravans, lorries, freight etc) and by flying. It spreads naturally at a rate of about 80 km per year.

Having no real predators it has spread quickly though France, entering the Channel Islands in 2016 and reaching England in the same year. It has spread to northern Germany, Holland, Spain, Portugal, Belgium and Luxembourg. Its nest and/or adults have been found in England in 2016, 2017, 2018, 2019 and 2020, but mainly in the south of  England. Jersey has a particular problem with them wth over 80 nests found in 2019.

The reason to preserve specimens of ‘nigrithorax’ and hand them over to the NNSS or NBU is that they can be genetically tested it see if it is related to the first invasion in 2004. A different genetic make up might indicate there is a new hornet source and thus a different route by which they are getting into England and so a different route to watch.

Be very careful with live flying ones as they sting and they can be aggressive. If in doubt leave their capture to the experts. Should a specimen of the Yellow Legged Hornet be found and captured put it in something like a match box in the fridge or freezer. If you put it in a glass container it will deteriorate through getting damp. Again if you are not equipped leave it to an expert.