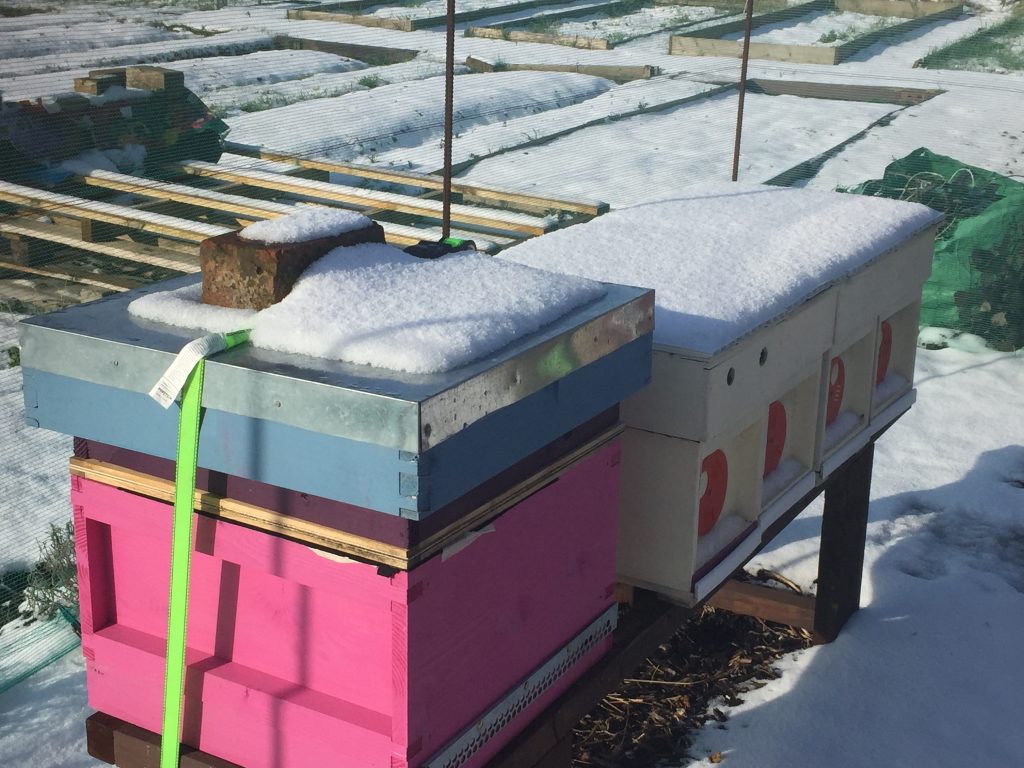 What do Beekeepers do during Winter?

It was too cold in the shed for DIY so I chose to stay inside to read. My first year as a beek had been stressful and I was hoping winter might be a bit easier – but it wasn’t!

After months of regular inspections, getting up close and personal literally stopped overnight. Apart from an oxalic drip and keeping the colonies topped up with fondant, there was nothing to do except wait for spring. 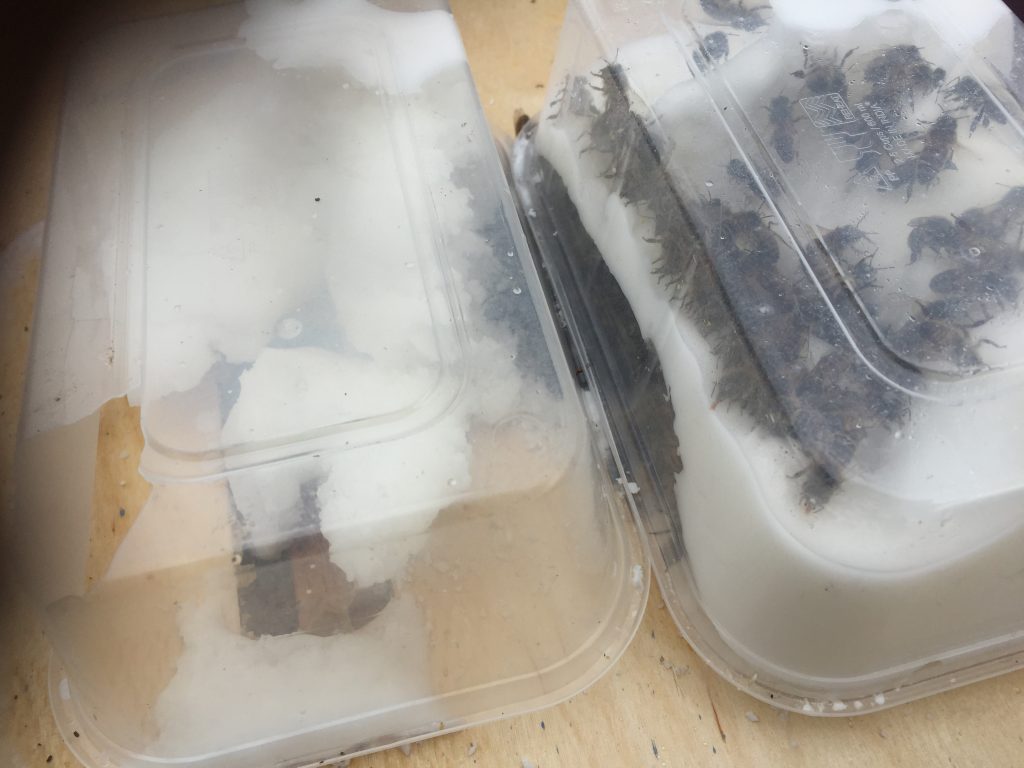 Putting the beginner books aside, I turned to beekeeping history. I have a passion for the ancient Greeks s0 began with Aristotle‘s History of Animals. This contained both accurate observations alongside delightful misunderstandings.

Wax is made from flowers. They bring the material of wax from the droppings of trees, but the honey falls from the air, principally about the rising of the stars, and when the rainbow rests upon the earth. (Chapter 19, Book 5)

Was Aristotle an ancient philosopher or poet? Sometimes, it’s hard to tell the difference.

Also online, I read Huber’s Observations of Bees translated by C. P. Dadent of Dadent Hive fame. Among Huber’s achievements was discovering queens mated in flight workers could lay eggs. The style of writing is dated but charming.

You see, Sir, that this experiment is positive. We used an old queen, placed her in the hive at the time of her laying of drone eggs: we saw the bees accept her, and at that time begin the building of royal cells. The queen laid in one of those cells under our eyes, and lastly left this hive with a swarm. We repeated this observation several times with equal success. (Page 74)

More remarkable, Huber was blind and reliant on his assistant, François Burnens, to conduct experiments and make notes.

Alongside these, I read a number of novels with beekeeping themes.  I’d recommend The Beekeeper’s Pupil by Sara George. Written in the style of a fictional journal, this book tells the story of Huber from Burnens point of view.

Another one rooted in the real world is The History of Bees by Maja Lunde. This offers a fictional account of three beekeeping families, set in the past, present and future. Of most interest to beekeepers, might be the character of William from the 19th century, who tries to invent and patent a new style of beehive, utilising the principle of beespace.

Lastly, I’d recommend the Beekeeper of Aleppo by Christi Lefteri. This book echoes the real-life story of Dr Ryad Alsous, professor of agriculture at Damascus University, who arrived in the UK in 2013. Since settling in Huddersfield, Dr Alsous has set up the Buzz Project, which aims to teach beekeeping to refugees and others experiencing displacement.

…at last March arrived and temperatures began to rise. It was coming up to my first anniversary as a beekeeper. They’d arrived mid-April 2020, so I was still in new territory when it came welcoming in a new beekeeping year. 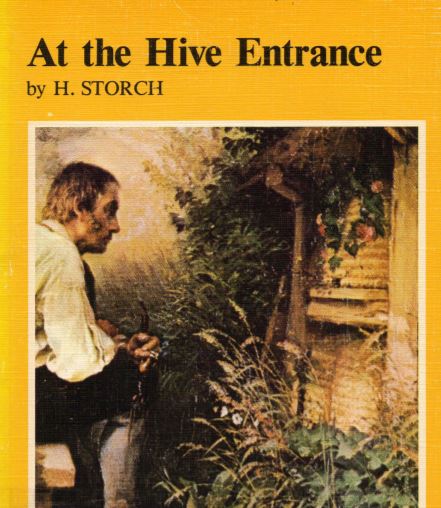 At the Hive Entrance by H Storch is freely available online e.g. Internet Archive but if (like me) you still prefer paper, it can be purchased.  Throughout March, whenever the sun shone, I walked to the allotment, pulled up a chair, and compared his observations with what I could see.

It was clear the bees had survived and I was delighted to see them but by the end of March, the worry re-appeared. I needed to look inside but with night temperatures below zero, I was reluctant to break up the main cluster. Instead, I fretted about space, warmth, food supplies and so on. You name it and I found something of concern.

After last year’s early swarm, I knew space was a priority. I liked the idea of putting on a second brood box and encourage the drawing out of frames. One of my aims is to expand this year, so having drawn comb would be useful for making nucs. However this, or adding a super, would reduce the hive temperature. 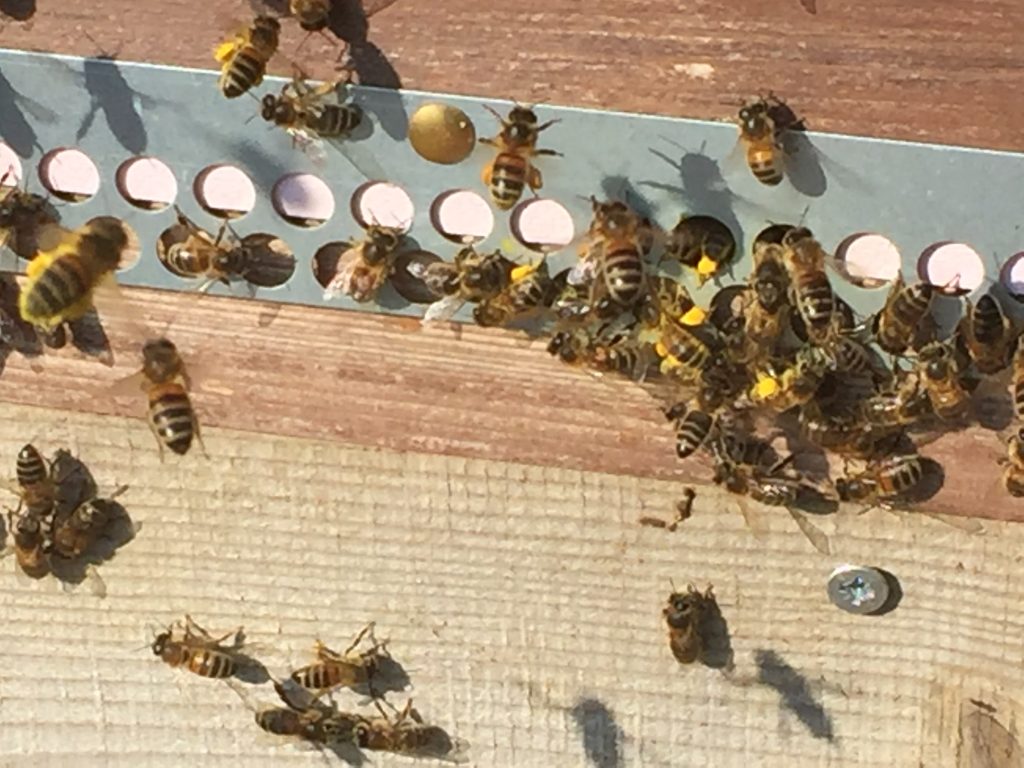 Meanwhile, I was excited to see yellow pollen being taken into the hive. There were catkins on the weeping willows close to the allotments, and huge beds of crocuses flowering on the grass reservations of the dual carriageway, but I wasn’t sure what pollen they were bringing in.

I realised yet again, how much I’d previously taken nature for granted and that beekeeping is about so much more than just keeping bees.

As pollen was a sign of brood, it looked like the queens had survived and I needed to assess the space situation. On a warmer day, I suited up, lit the smoker and risked lifting the crown board for a quick peep. The pink-ladies had approximately 5-6 frames of capped brood and the brown-hive-girls 3-4 frames. I didn’t break up the main brood nest and opted for swapping some frames of untouched stores with new frames as a temporary measure. 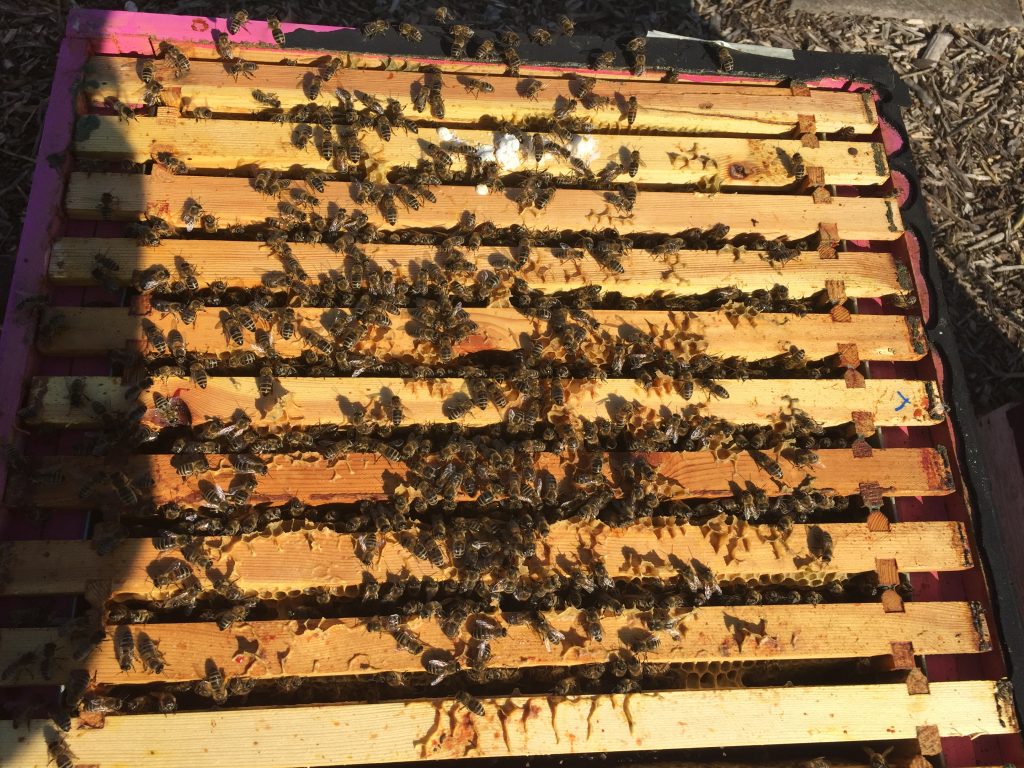 That was two weeks ago. A communication from the BBKA reminded beekeepers to stay vigilant about the risk of starvation, so they still have their fondant. The pink-ladies have built comb up into the larger tub, prompting me to go back in to check on space, but the new frames hadn’t been touched.

Temperatures are still below freezing on a night and rarely above 7 or 8 degrees during the day. It looks like the bees are still clustering but next week is forecast to go up to 14 degrees. As this will be mid-April, I need to get in there to see how things are looking. They say once is a mistake but twice is bad decision making and the last thing I want is another swarm! 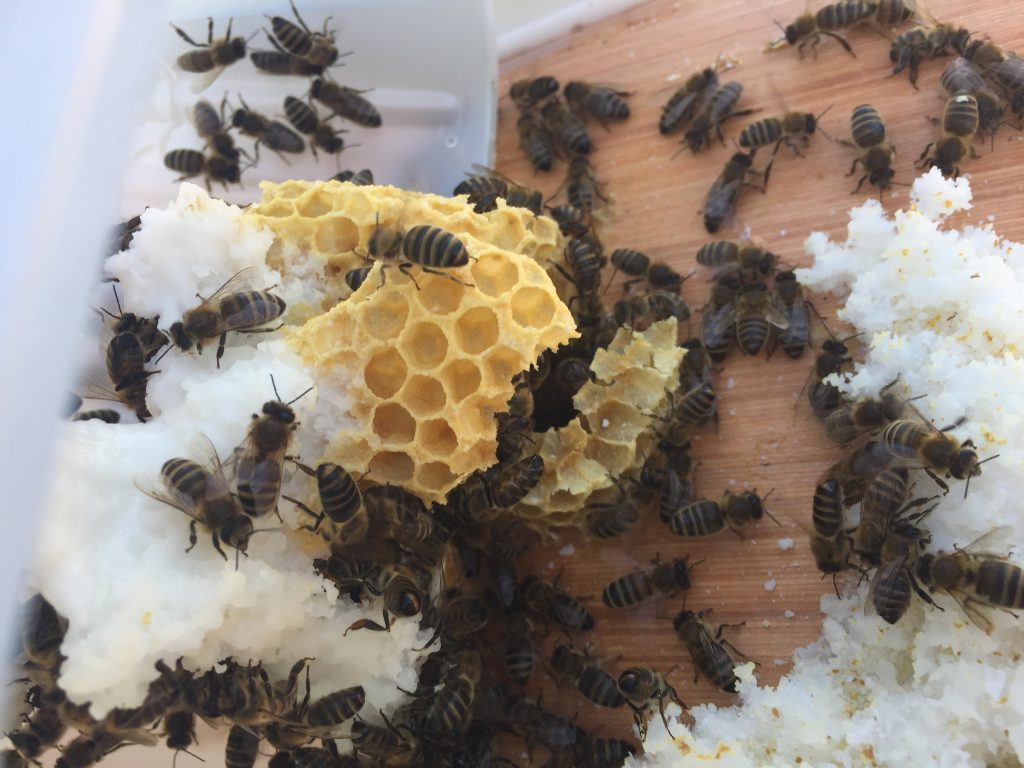