The first swarm happened exactly the same time as last year. Beware the 30th May! This time the bees landed on an allotment behind mine and plot owner Walter was so delighted, he filmed them and posted the clip to online (see video below). Not everyone loves bees so this was the best possible start, also the cluster was hanging from a fence and a low tree branch, so was textbook perfect.

You can read about how I collected the swarm here Maybe I should have tried tanging the swarm. I mistakenly put it on the wrong blog but decided to leave it there. The post also introduces the historical practice of banging metal objects together, known as tanging. The noise seems to encourage a swarm to either return to its hive or settle above the tanger’s head. It’s a perfect example of where science and folklore mix together.

Collecting my first swarm taught me catching is different to keeping. Even if I’d practised tanging, I found out there was no guarantee the bees would stay in the box.

Somewhere between carrying the bees back to my allotment, and returning that evening to hive them, they all escaped and I found myself looking into an empty box. I had no idea what happened, or where they went, and it was almost as embarrassing as last year, when the bees swarmed just a few weeks after they moved in. It seemed I was still more a Beeloser rather than Beekeeper.

But there was a chance of redemption, alongside a strong sense of déjà vu, when a week later, a second cluster formed on an apple tree on Walter’s plot. The first time I’d panicked and called on Patrick for help. He’d abandoned his Sunday morning cup of tea and turned up, booted, suited and ready for action, but I knew this time I had to be brave and go solo.

As always, I learned from making mistakes. Several of them! I forgot to take a moment to gather all my tools together, so was continually having to walk back to the car or back to the bee shed on my plot. I forgot to spray the cluster with water, which helps it ‘stick’ together so the bees are more likely to fall in a clump.

For the swarm box, I was using a nuc body, with a detachable floor.  It was heavy and awkward to hold with one hand, while trying to knock down the cluster with the other. I’d lost my bee brush and couldn’t find the feathers, so was using my hands, resulting in a few stings. The bees were relatively calm and docile, but I could understand their annoyance at being pushed into a box and didn’t blame them.

The main problem was their reluctance to stay put. They kept reclustering on the branches which led me to think I didn’t have the queen because, without her, there was nothing to persuade the bees to stay.

I dabbed some lemongrass oil around the nuc entrance. This smells similar to the nasonov pheromone and acts like a signpost saying ‘this way please‘.  The image below shows bees with raised abdomens who are releasing the nasonov scent to direct other bees towards a hive entrance.

I also followed Patrick’s suggestion of adding a frame of brood as larvae can encourage the bees to remain. Eventually, it began to look as though more bees were in than out of the box. I decided to set the nuc up under the tree overnight, hoping the combination of smell and brood would direct any stragglers towards the rest of their colony.  Food wasn’t a problem as they’d have filled their honey stomachs before taking flight but, determined not to lose them this time, I added a frame of drawn comb with some stores, just in case any of them were feeling hungry. 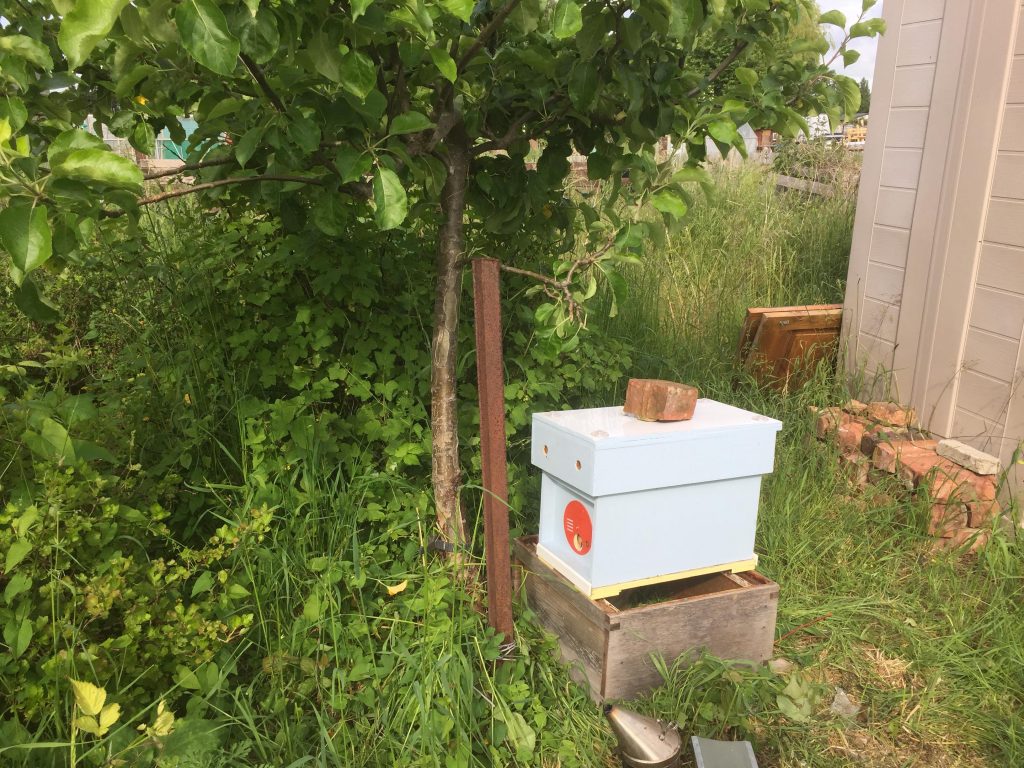 The next morning I tentatively approached the nuc and was relieved to see activity around the entrance. Lifting the lid, there were bees over the top of the frames, in particular the one containing brood. Whether or not they were queenless, they’d decided to stay. I left the nuc for another 24 hours, in case there were more stragglers still looking for a new home, then carried it carefully back to my apiary.

I’d caught a swarm on my own and, more importantly, had kept it. I’d made a mess of getting them into the box so was glad no one had been there to see me, but overall it was another step towards becoming a real beekeeper 😊

The next swarm challenge happened a few weeks later. A cluster of bees landed in a tree on the street next to me. The house owner had contacted the Beverley Beekeepers swarm line on 07760 496955 and Patrick suggested I accompany him to collect it. It was so close to home I couldn’t say no.

The next blog post will cover what happened, including how I returned later that day to collect a mini-cluster of stragglers, on my own. It was also my first lesson in beekeeping PR with all the neighbours, which is such an important part of the swarm collection experience.