The anniversary of my first year as a beekeeper came and went without incident. I’d emerged from the winter with two healthy colonies and while Summer honey would be nice, the aim for 2021 was to increase the size of my apiary.  The low points in 2020 had taught me the value of having more bees for comparison, to merge with, or for swapping frames, as well as to sit and watch on a sunny day. 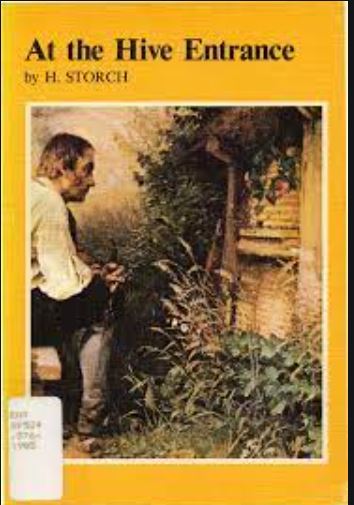 I’d read At the Hive Entrance and been fascinated by the amount of information to be gathered simply by watching. Bees taking in pollen often indicate the presence of larvae and I particularly loved their orientation flights, where new foragers hover in front of the hive entrance, memorising the size and shape of the home they need to return to.

Bee navigation is fascinating. Worker bees understand concepts like distance and angles as well as the position and movement of the sun. They can also communicate this information to other bees, in the dark, through the performance of different waggle dances.

While watching the bees, I had the idea of using a selfie stick for a closer look. Any good results were more luck than judgement, but I was delighted with the close-up shots of pollen baskets and fine dust sticking to the hairs on their bodies. 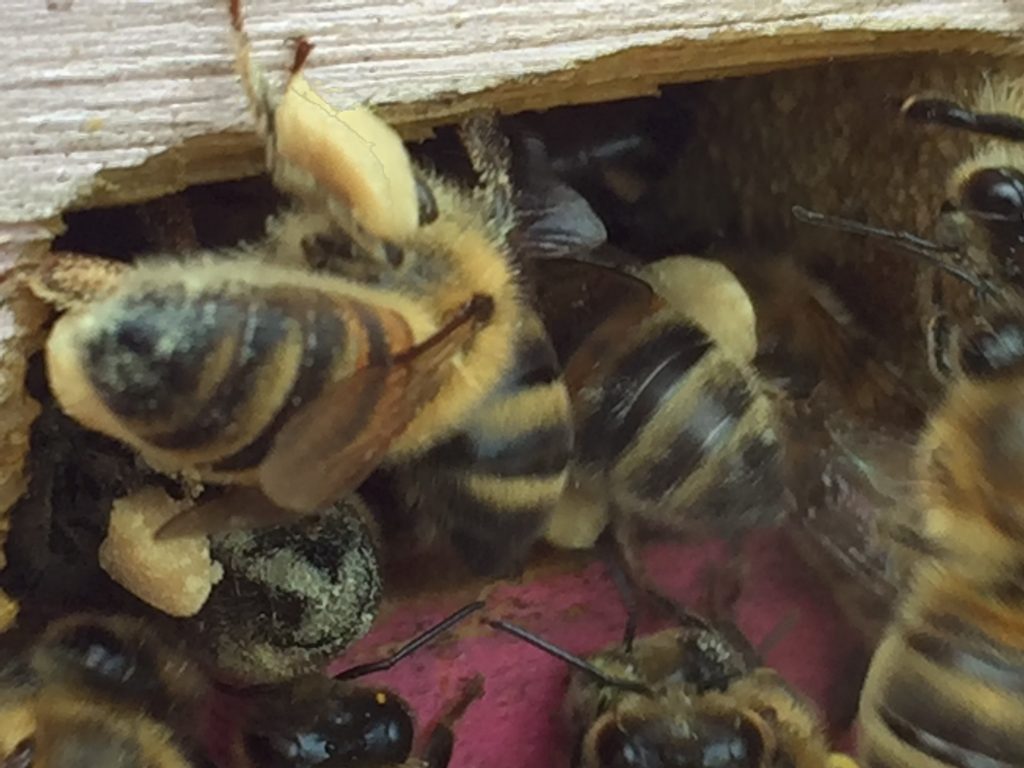 One of my decisions for 2021 was not to mark the queens. It was stressful for both of us and maybe not necessary if eggs were spotted. However, when it came to making splits I soon learned the value of having queens which could be easily identified, either via the international colour code or other methods such as numbered discs. 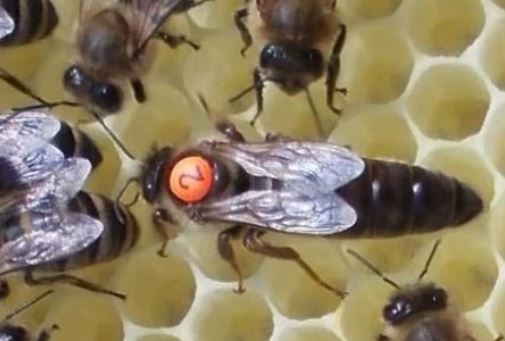 I was making splits to increase the size of my apiary but also because I was determined to control any desire to swarm. Last year I’d lost half a colony to a swarm within weeks of them arriving. Once is a misfortune, twice is careless. As soon as I saw queen cells this year, I knew a proactive approach was required. Avoiding swarms is an integral part of beekeeping, especially if you have your apiary in a public place like an allotment.

I also wondered if it might be too cold to swarm. The weather in May was terrible. I was still feeding the bees fondant and, despite them having plenty of space, they rewarded me with opportunities to study their comb making skills, as it pushed up through the crown board and into the fondant boxes. 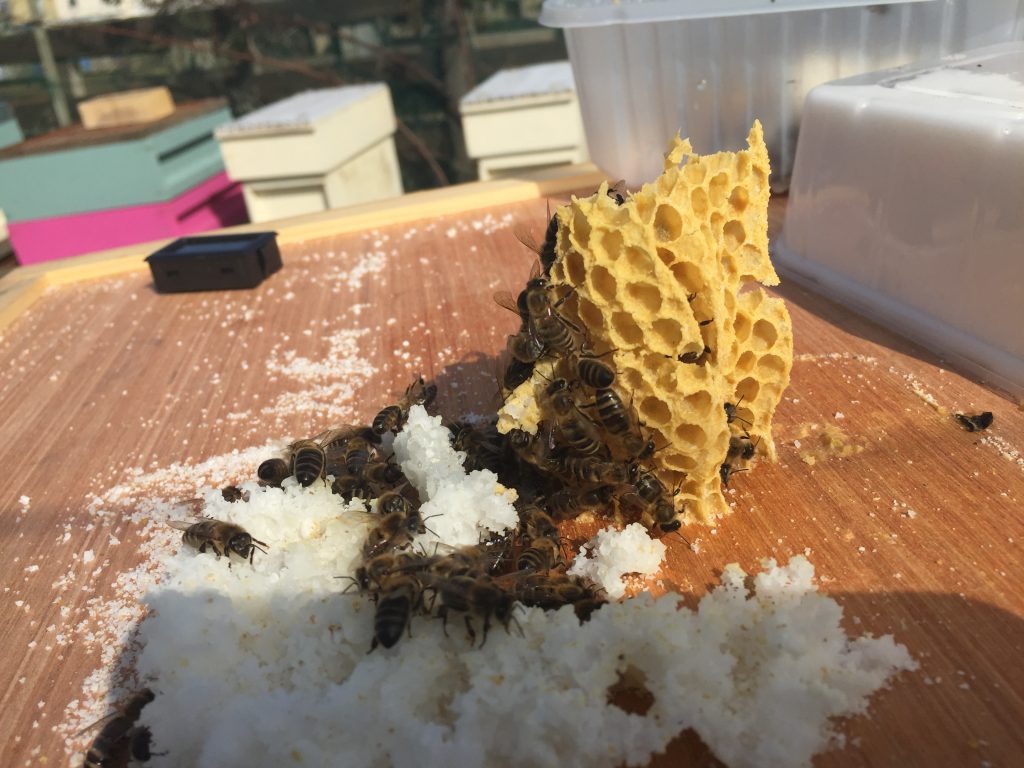 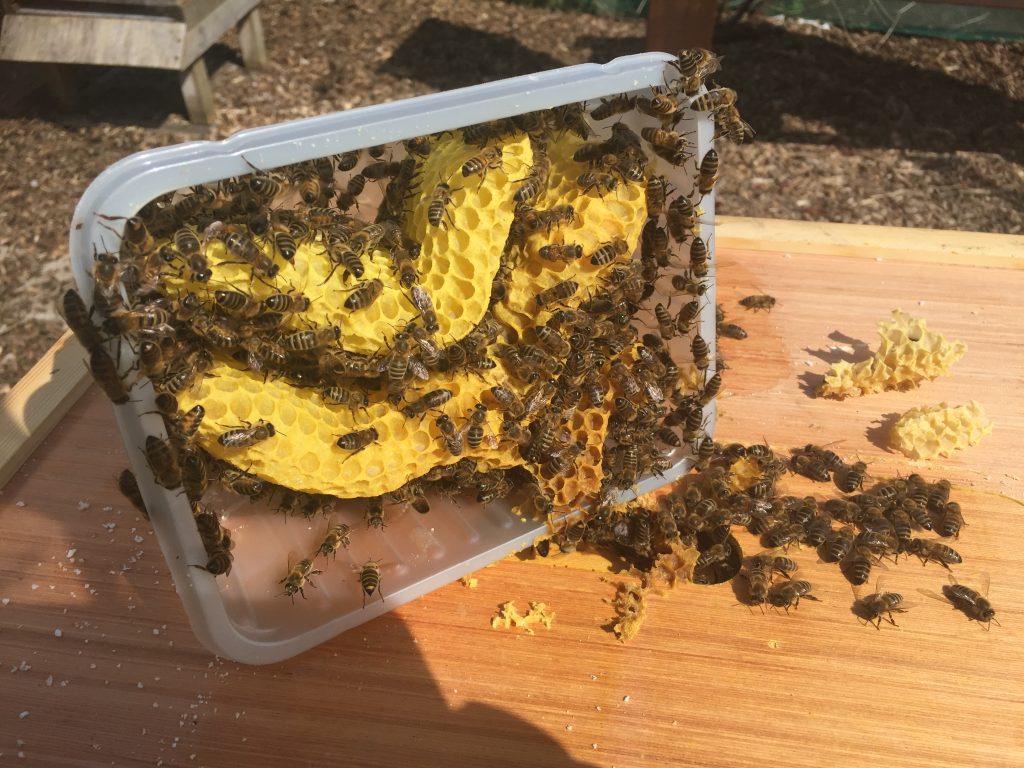 The first sight of queen cells is a sign the swarming instinct has kicked in. You can take them down but others will follow and it isn’t enough to remove them. If bees want to go they’ll go, unless you can persuade them otherwise, so thorough  inspections during May are crucial.

Some people say QC are only found on frame sides and bottoms but in reality, they can be anywhere. Also, bees are expert at hiding them. Supercedure and emergency QC might be more commonly found in the frame centre, but not always and it helps to understand the difference between them from the start.

Supercedure is like a collective colony decision to replace the queen when the bees have decided, for example, she’s ageing, running low on sperm, or unwell. Supercedure cells are often made from a chosen egg, and usually look good. Emergency queen cells are what the name implies; an emergency response to being queenless. They can be shorter and more stubby or just generally look like they’ve been produced in a rush.  They can also appear within 5 days. An absence of eggs is often part of the emergency, so the cell is made from converting existing larvae, destined to be a worker. Quite an upgrade!

Despite knowing what to look for, the first QC’s took me by surprise. I wasn’t prepared so took them down. I thought they’d make others just as good during the following week. By then I’d have my nucs ready and waiting. Despite it being my second year, I still needed to learn how knowing what to do in theory is not the same as being ready to do it in practice. Also, of course, the bees thought differently. The next QC’s were shorter, stubbier and looked like less care had gone into them.

Nevertheless, I used them for my splits and in total, made up four nucs, only one of which produced a new queen. May was unseasonably cold which would have significantly reduced the chances of successful mating flights. The online forums reassured me I was not alone in finding the weather a deterrent to making splits but by the end of May, it turned warmer at last.

With swarm control always on my mind, I was keeping a close eye on my original colonies; the Pink Ladies and the Brown Hive Girls. Both had supers on and for my ‘splits – take two – plan’, I took some frames of eggs and brood from them to restart the three failed nucs. In my mind, this was also creating additional space in the brood box, making it less likely for them to swarm.

How wrong I was!

The next post will look at what happened when, exactly a year to the day since the Brown Hive Girls swarmed in 2020, they did it again in 2021.

The video below shows the Brown Hive Girls’ queen during an inspection in May this year.

One thought on “Starting the year with splits and swarms”