My swarming experiences got off to a bad start. First – the bees escaped before I’d had a chance to rehive them. Second – the bees kept reclustering in the tree. This suggested that each time I’d failed to capture the queen.  The good news was my bees seem to have found a first-stop swarm site on the allotment behind me, and the plot owners don’t mind at all. Every allotment beekeeper needs neighbours like this. I wrote about the swarms in a post titled  Swarming, tanging, losing some bees and gaining others which I mistakenly uploaded to my poetry blog and decided to leave it there. It’s been one of those years!

Then Patrick called to say a house owner had contacted the Beverley Beekeepers swarm line (07760 496955) and did I want to help collect it. The swarm was in the next street to mine, so I couldn’t really say no. This would be my first ‘public’ collection of bees.

Beverley Beekeepers, like most other beekeeping associations, offer a free swarm collection service but only for honeybees. With over 250 types of bees in the UK, swarm collectors have to establish the presence of the European honeybee, rather than, for example, wasps, hornets or bumblebees. Once this was established, I gathered up my kit and set off.

A crowd had already formed around the garden where the bees were clustering in a leylandii type tree. It looked like some upper branches had been previously removed and the cool, dark place inside was perfect for bees! 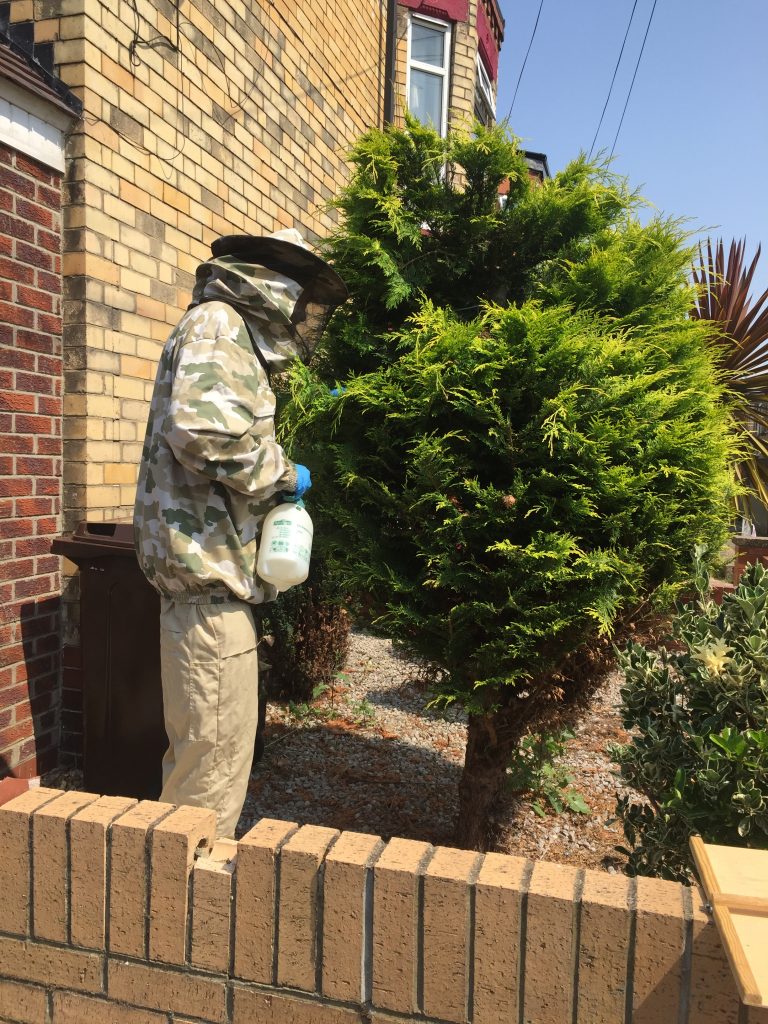 I wasn’t tall enough to see inside but Patrick could easily reach, so he sprayed them with water to encourage the cluster to stick together. 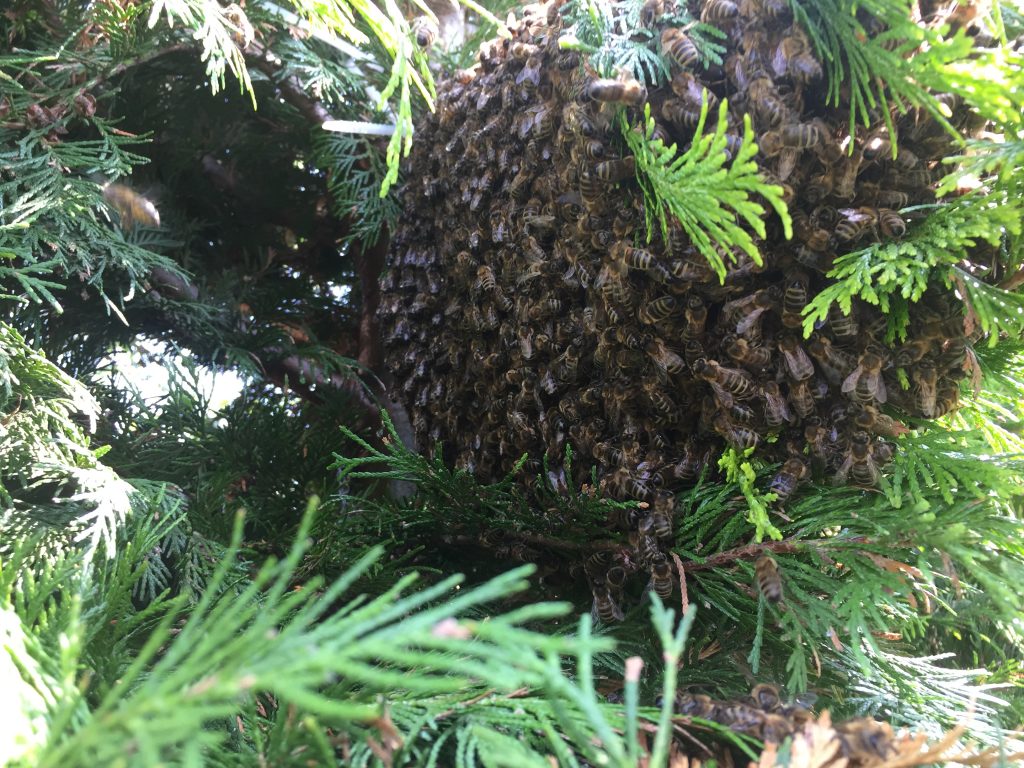 Everyone wanted to know how we were going to gather them and I quickly learned what a great opportunity swarm collecting is to talk about bees.  However, it also means you’re very much centre-stage, so not for the shy or faint-hearted!

With several people filming the process, we shook the cluster into the box, before turning it upside down on a sheet. The end was propped up so any bees we’d missed could walk inside to join their queen. 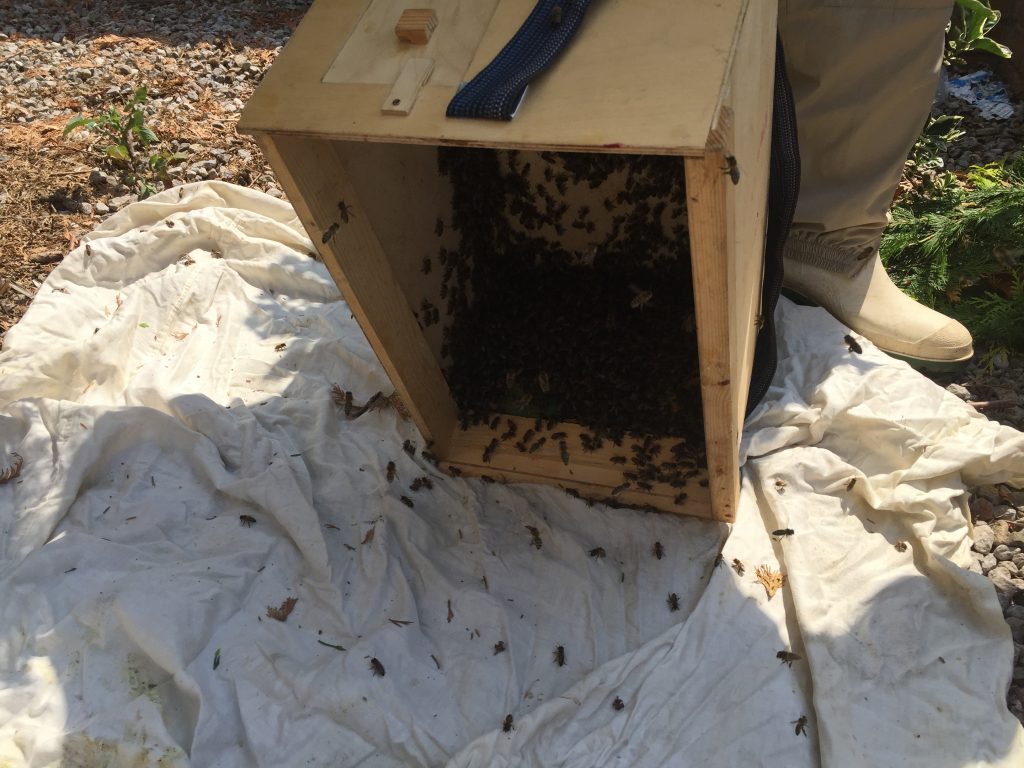 The swarm had arrived the day before. In just 24 hours, they’d begun to cover one of the branches with wax in preparation for building comb. Bees swarm in two stages. Firstly, they land somewhere close to the original colony. My previous collections on the allotments were first-stage swarms.  The bees then make a democratic choice as to which of several potential sites they will settle in. These bees looked like they’d found their final destination so it was important to move them. Not everyone is fascinated by bees. They are usually docile during a swarm, but the risk of being stung when putting out your bins or carrying in the shopping is understandably not welcome. 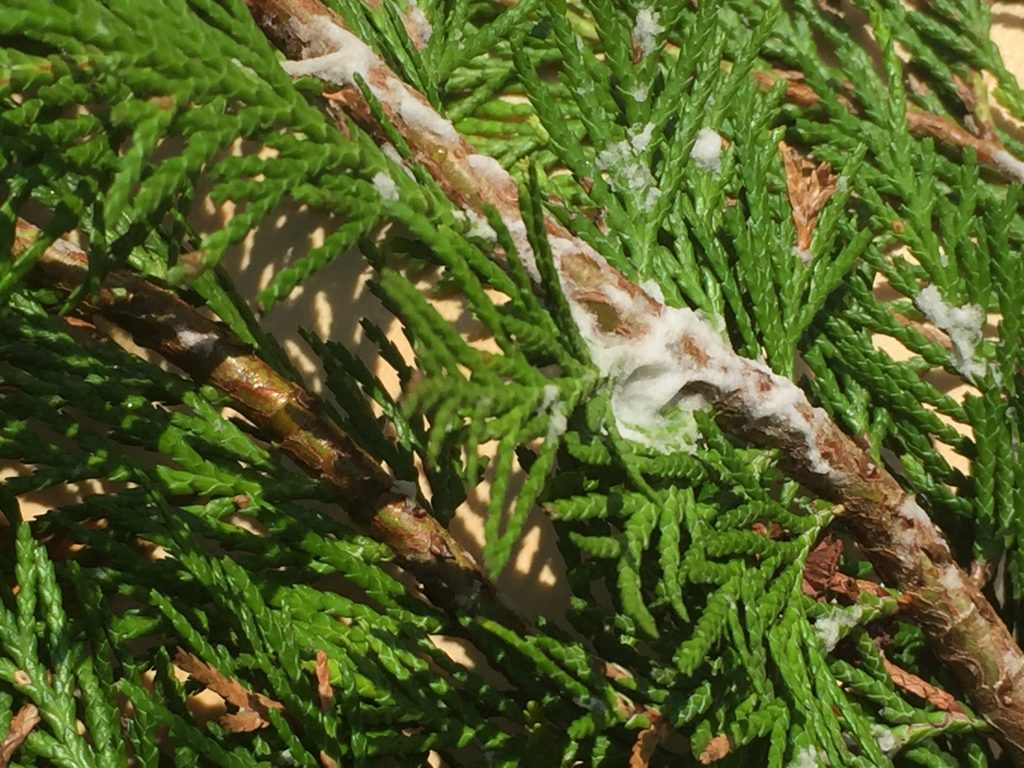 Handing the branch around, we explained about comb building and how the bees make their hexagonal cells. By now, the crowd had increased in size and everyone had questions. Many of these were about bees being at risk in particular bumblebees and solitary bees who are struggling to survive. A number of campaigns exist for raising awareness. These include the US based World Bee Day and National Honeybee Day, while in the UK, the Department of Environment, Food and Rural Affairs (DEFRA) held a Bees Needs Week in July this year.

One contributory factor is changes in agriculture, for example, the move towards mono-crops in fields and the removal of hedgerows. These reduce the number of wildflowers bees need for pollen and nectar. The use of pesticides is also an issue with a public consultation this year on the use of neonicotinoids which can damage bee health.

It might seem problems like these are too huge for individuals to make any real difference, but everyone can help by planting more bee-friendly shrubs and flowers in pots and gardens. 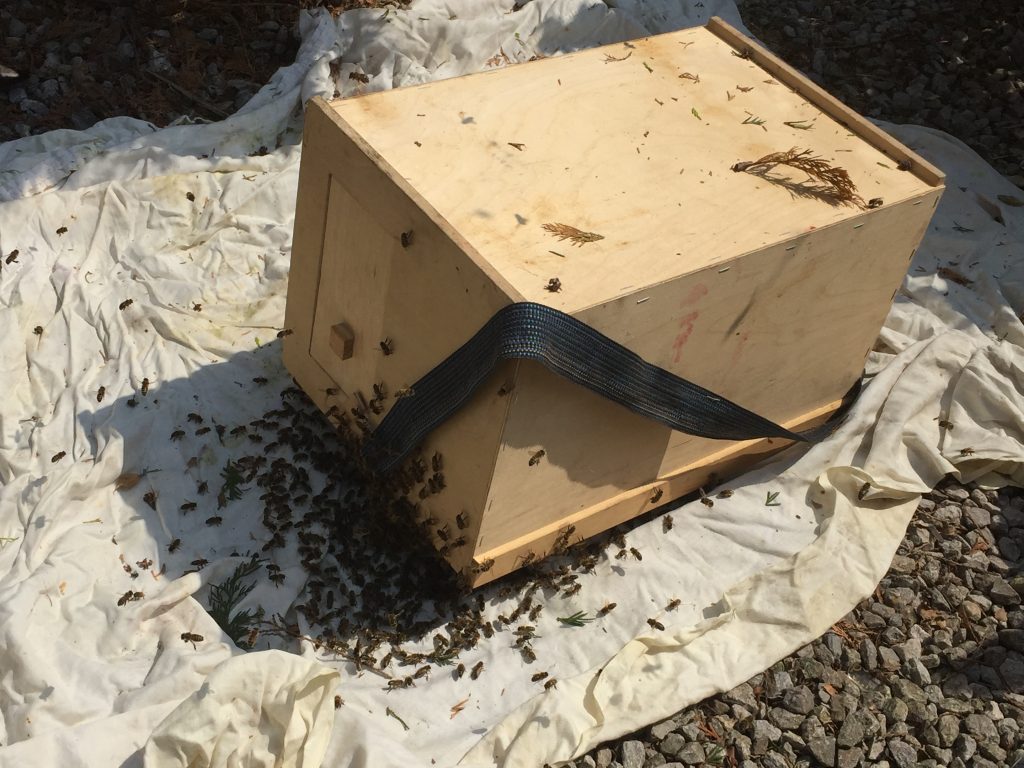 The bees continued to walk into the swarm box and it was soon time to wrap them up ready for removal. Beekeepers tend to keep swarms they collect, or pass them onto other beekeepers, after letting them settle and checking for disease. I was taking this swarm and it was my first experience of driving with a boot full of bees. 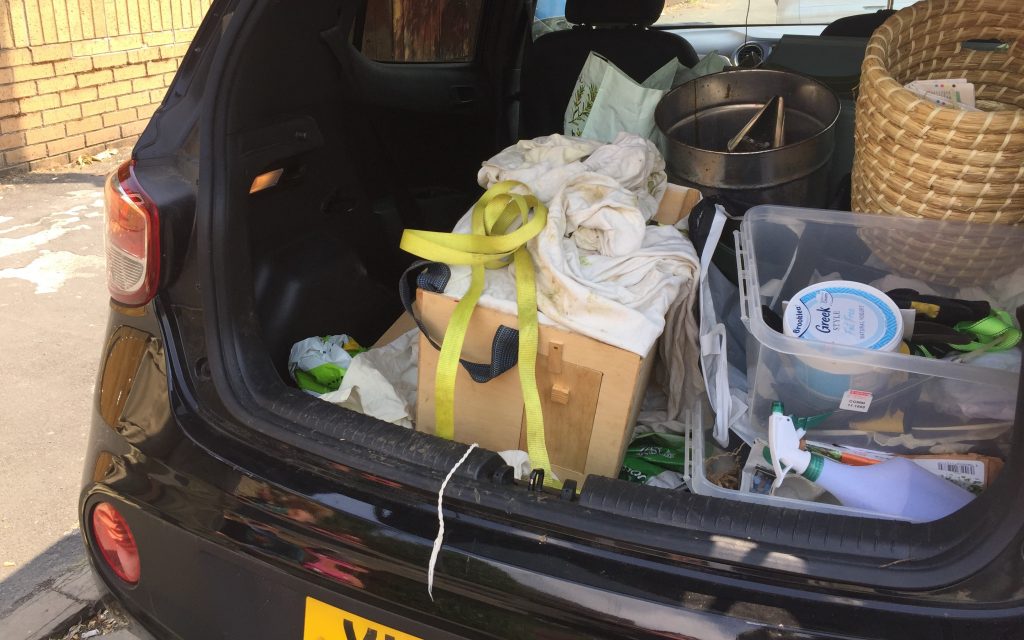 The lid was placed over the sheet and the box strapped down. Fortunately, the allotment was only a few minutes away. Once there, I carefully carried the box to the apiary and left it in the shade until evening.

Unpacking them was the scary part. Neither hive nor nuc were the same size as the swarm box, so tipping them in was risky. They would still be in swarm mode and we’d interfered with their natural instinct. The more bees I lost at this stage, the greater the chance they would fly back to where we’d collected them from.

I decided to try the sheet-on-a-ramp method. Apart from YouTube videos, it wasn’t something I’d seen or done before but it always seemed successful. The idea is to create a ramp, cover it with the sheet and tip out the bees. They will walk up towards the relative cool and dark of the hive, or in this case, a nuc. 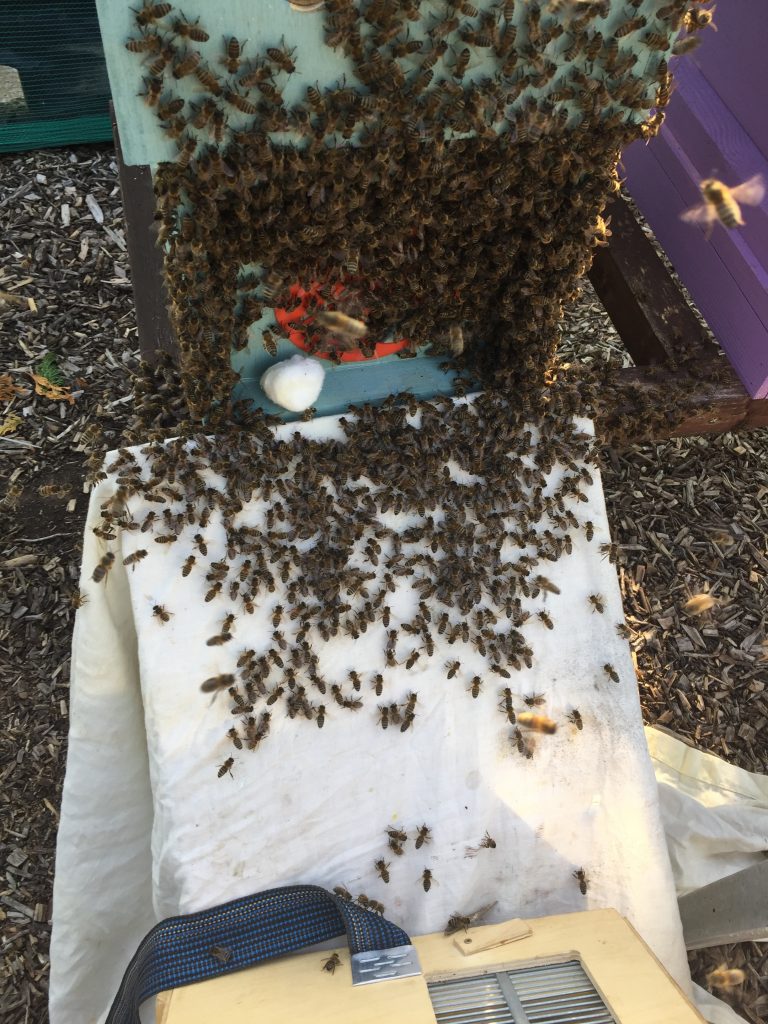 I added some drops of lemongrass oil onto cotton wool for encouragement (the smell is similar to queen pheromone)  took a deep breath and tipped up the box. At first, there was chaos. Bees were all over the nuc as well as the ramp, but within minutes they settled down and began to walk up towards the entrance. It was magical to watch!

In the middle of this, I received a phone call to say a small cluster of bees had resettled at the swarm site and gathered in the handle of the wheelie bin. Could I go and pick them up? The house owner was ok with them but had a neighbour who was less keen. As swarm collection is as much about PR as about bee removal, I was happy to return. 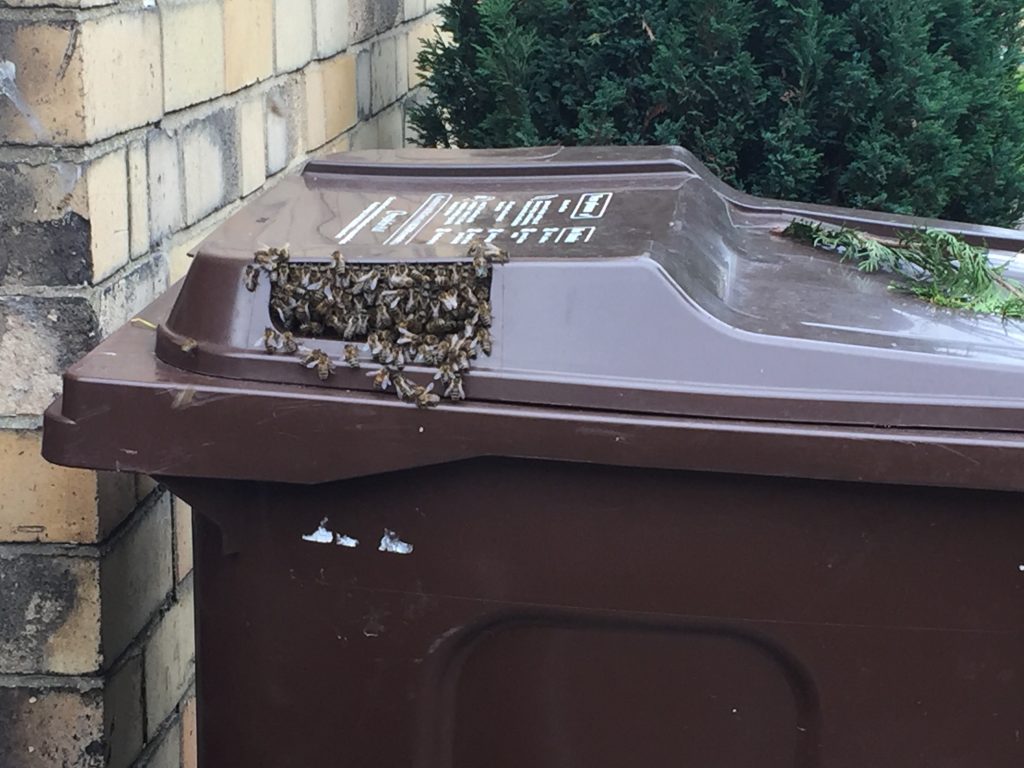 By now it was getting late and even more people were stood around watching and waiting. Very conscious of not having Patrick for assistance,  I sprayed them with water and managed to gently knock most of the cluster into a plant pot. I’d missed a few and after a few minutes, they regrouped in the handle. Using a feather, I brushed them into a small plastic food box I’d been using as a contact feeder. It had holes in the lid so I closed it securely and passed it around the group. You could feel the bees vibrate through the sides and it was lovely to see how fascinated everyone was at getting so up-close and personal with them.

Back at the allotment I tipped the late arrivals onto the ramp and watched the final ones walk up to join their new colony.  In just one day, I’d helped to collect a public swarm and also gone solo. Like everything with beekeeping, you learn more from doing it than you do from books and videos. There really is no substitute for taking a deep breath and going it alone!

The next post looks at preparations for winter. I began this year with two overwintered colonies and (so far) am ending it with five queenright colonies and 3 nucs, but am not sure the best way to get the nucs with their thinner walls, through the cold months ahead.

One thought on “on the public collection of bees”