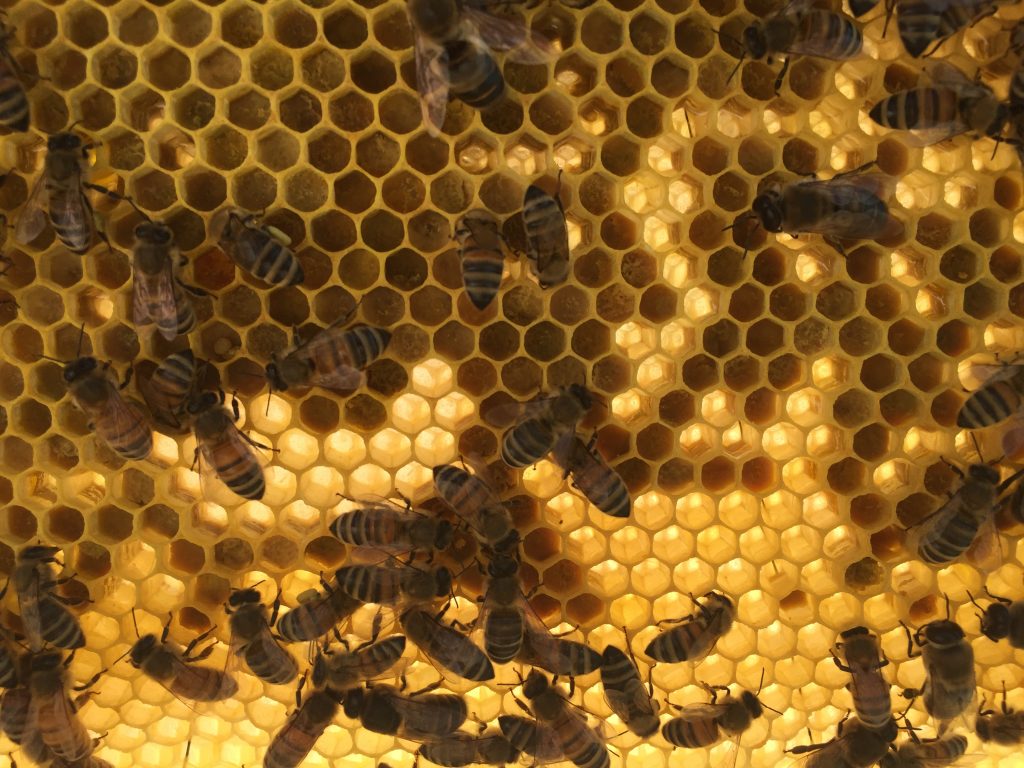 The bees arrived three weeks ago but I don’t feel like a beekeeper. When does the confidence kick in?

After the first solo inspection, I spent time reading and watching You Tube videos but there’s a dearth of practical advice for newbies. It’s like people forget how it feels not to know bee-speak. The association’s winter course was helpful, as was the Getting Started pages on their website, but the learning doesn’t really begin until you’re hands deep in a colony. Even then,  it’s not until you’re looking down at your bees, wondering where to start, that the learning curves gets vertical. 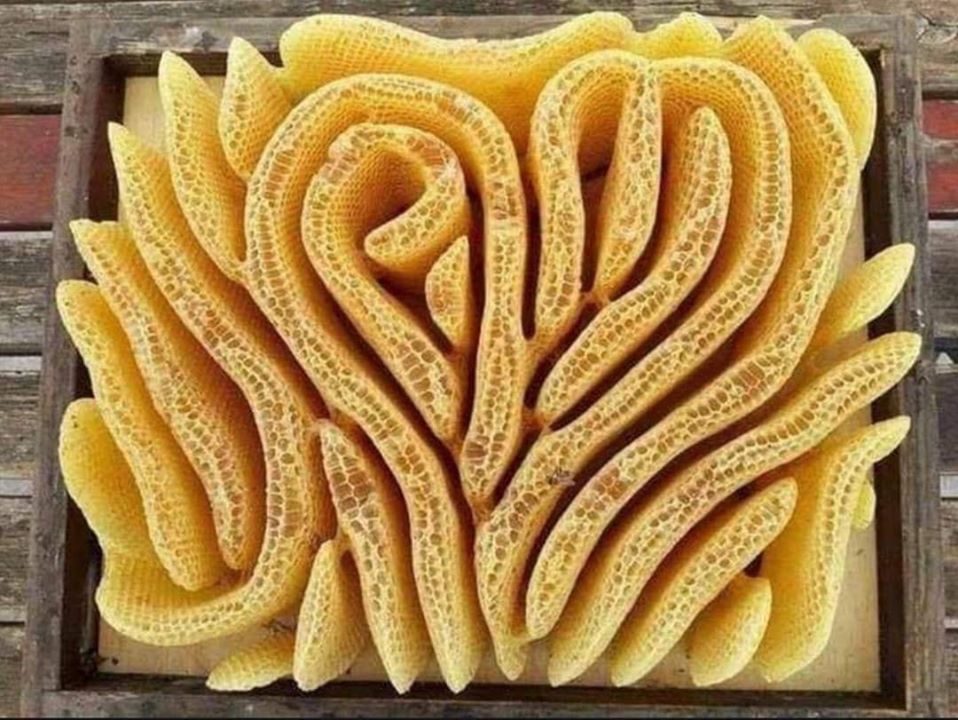 My second inspection was a hot day and the bees were flying. I‘d been looking forward to getting close-up again and was trying to be more relaxed. I thought the BBKA Basic Assessment criteria might be a useful guideline, although there’s an awful lot of it. Maybe that’s why you need to have kept bees for a year, but it seems a long time to wait. A common question on the allotment has been ‘are you qualified?’ I’d like to say yes, but the truth is I’m a beginner and it shows.

This week, both hives had lots of drawn comb, with stores on the new frames, plenty of capped brood and some acorn shaped play cups. These were taken out as advised. 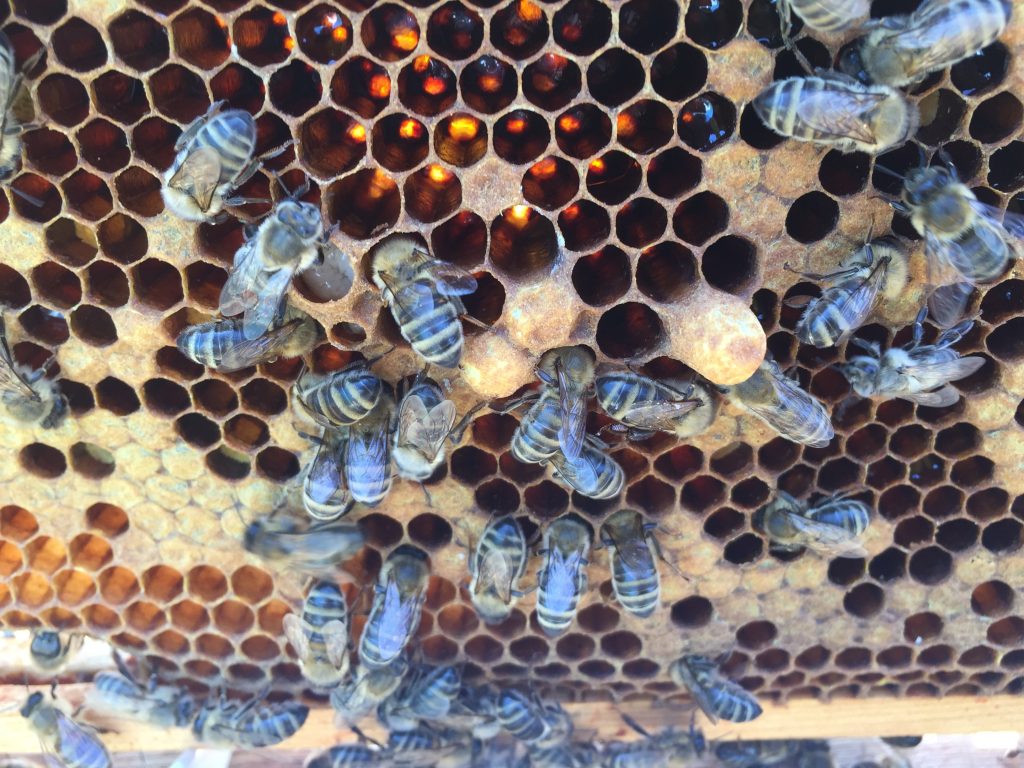 A couple of large cells I thought were queen cells, turned out to be drones. The difference being the queen cells go down while drone cells stick out horizontally. I’d seen patches of capped drone brood before but didn’t know they could grow so large. Why is this?

Because of trouble seeing eggs, I bought a stand to prop the frames up for photos, and developed a method for showing which frame was which. So far so good. 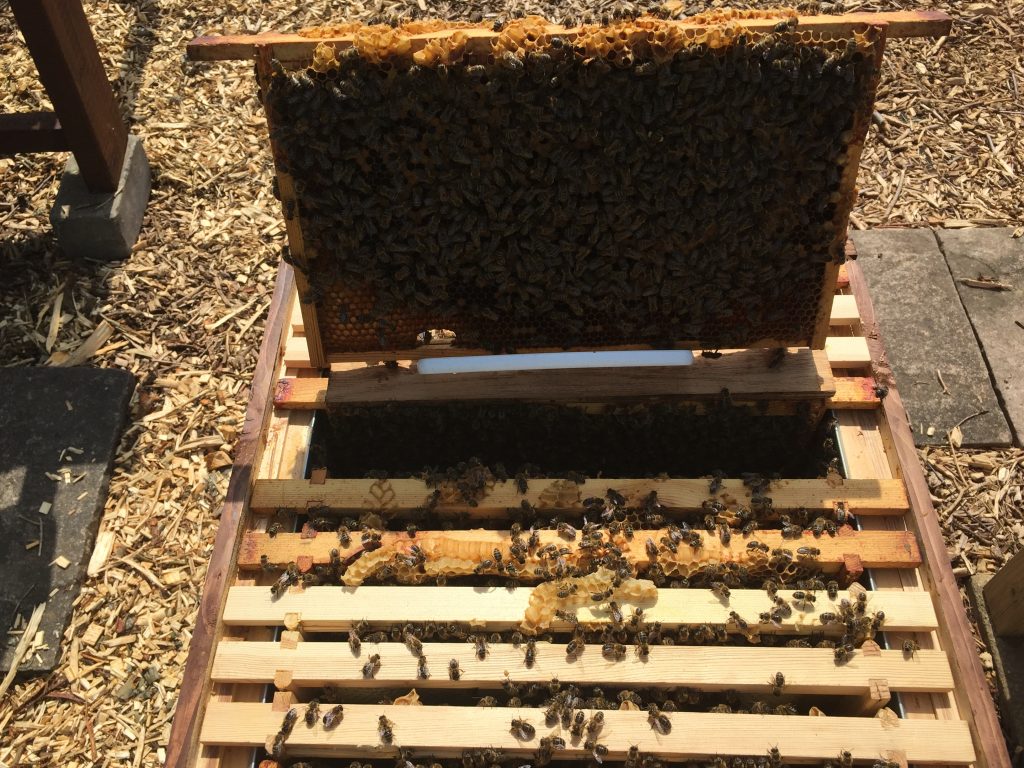 The sun behind gave an amazing light effect and the bees didn’t seem to mind posing to have their  pictures taken. 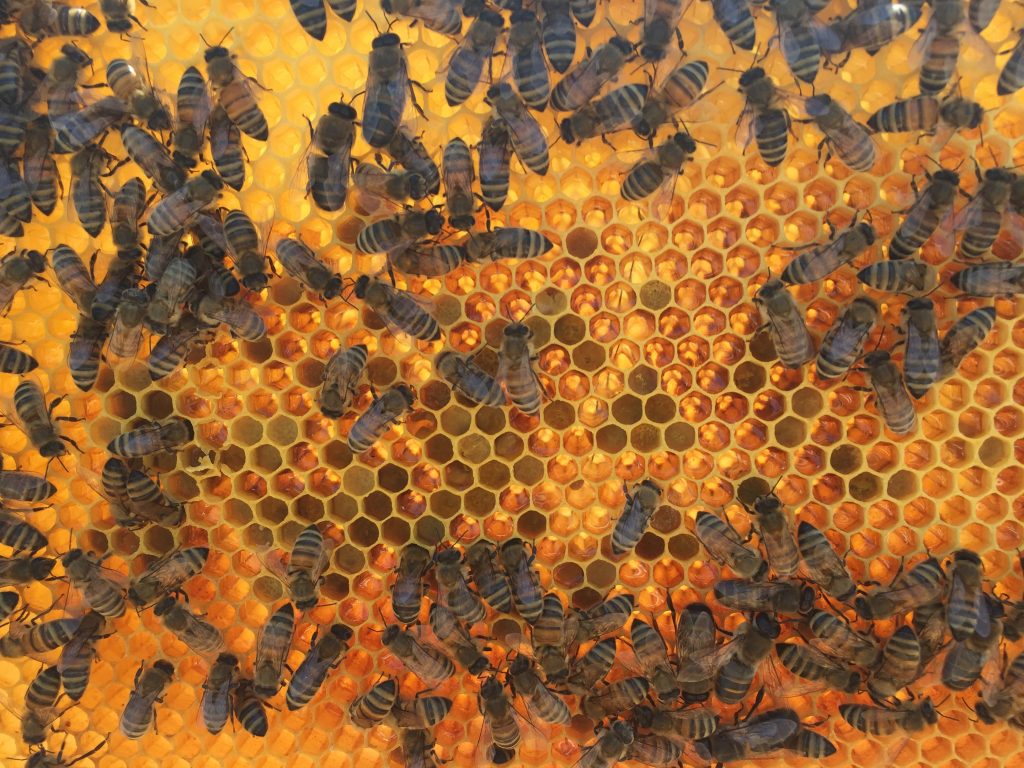 Again, there was lots of different coloured pollen, and, from my homework, I knew this was ‘bee-bread’. Forager bees bring pollen to the hive for other workers to process, and this gets mixed with saliva then sealed with a small amount of honey. 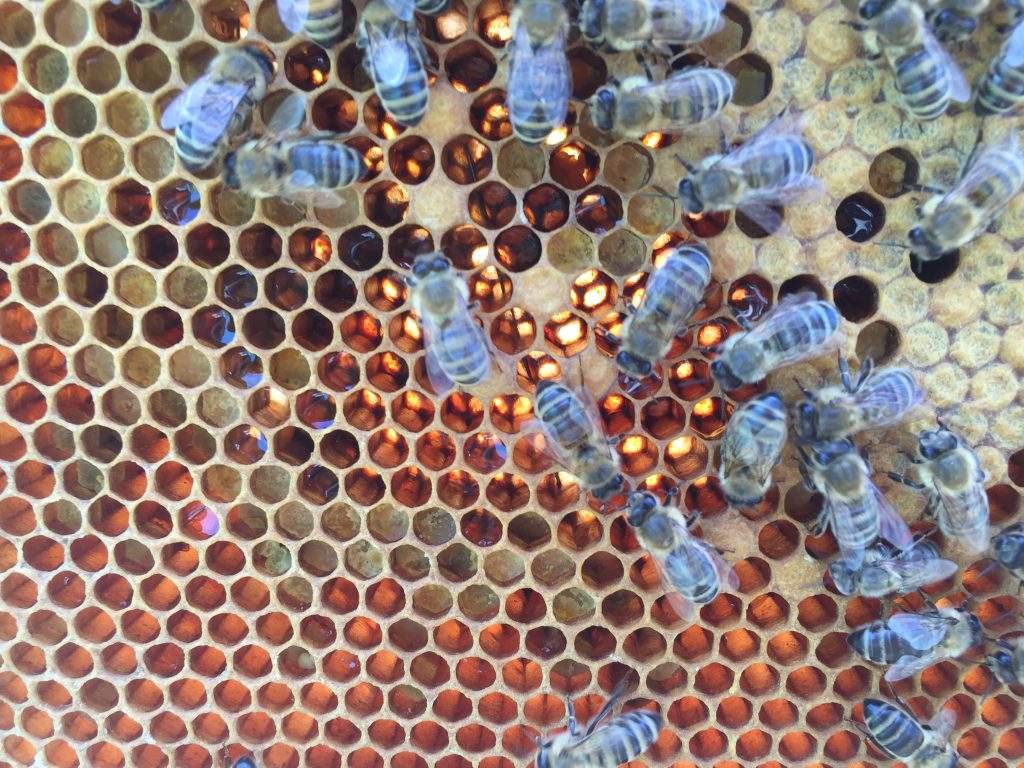 As a writer who retells ancient Greek myth, I was delighted to discover bee-bread is also known as ambrosia, the legendary food of the gods. The history of the honeybee goes well back to ancient times. The Greek god of bee-keeping was Aristaeus, while ‘Bee‘ was the name given to followers of the goddess Artemis and the priestesses at Delphi. Even the name of the European honeybee, Apis mellifera, has greek roots; apis being Latin for bee but mellifera deriving from the Greek ‘meli‘ for honey.

I’d been advised to ‘focus on what’s different’ but so much is simply the same and it’s still magical. I’m planning to make a videos during inspections and when this happens, I’ll probably never watch TV again! 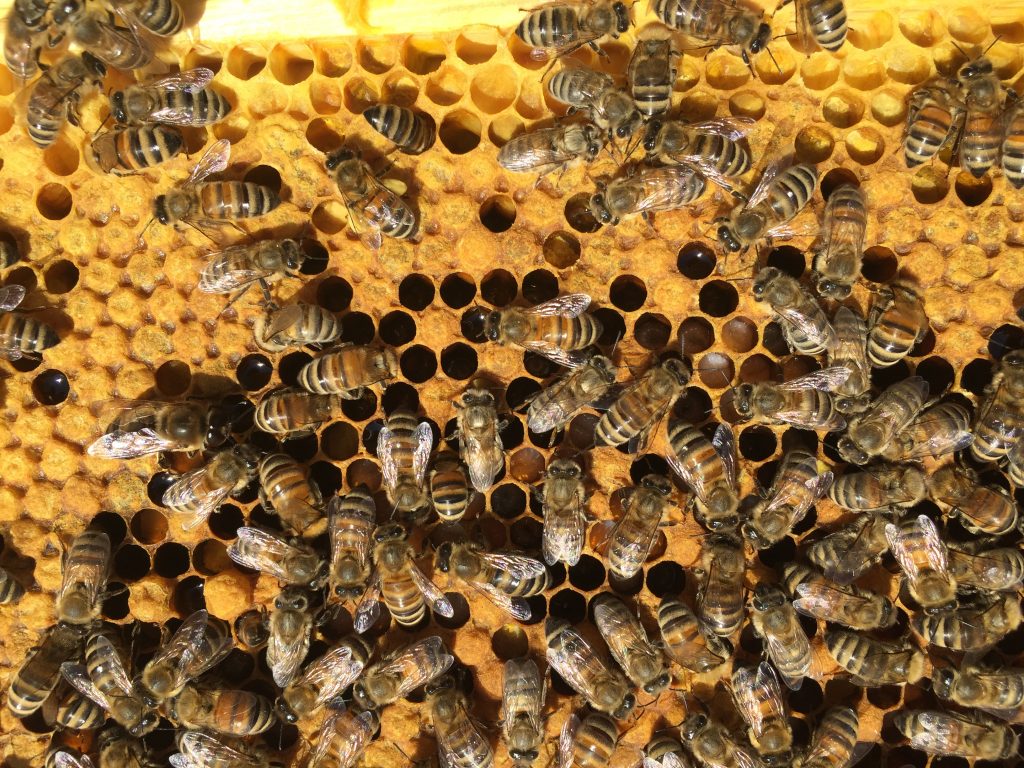 I noticed some capping on the cells looked different. It seemed more like sunken sponge cakes but apparently, the appearance is normal. I couldn’t find out what causes it or why it should look like this. Does anyone know? 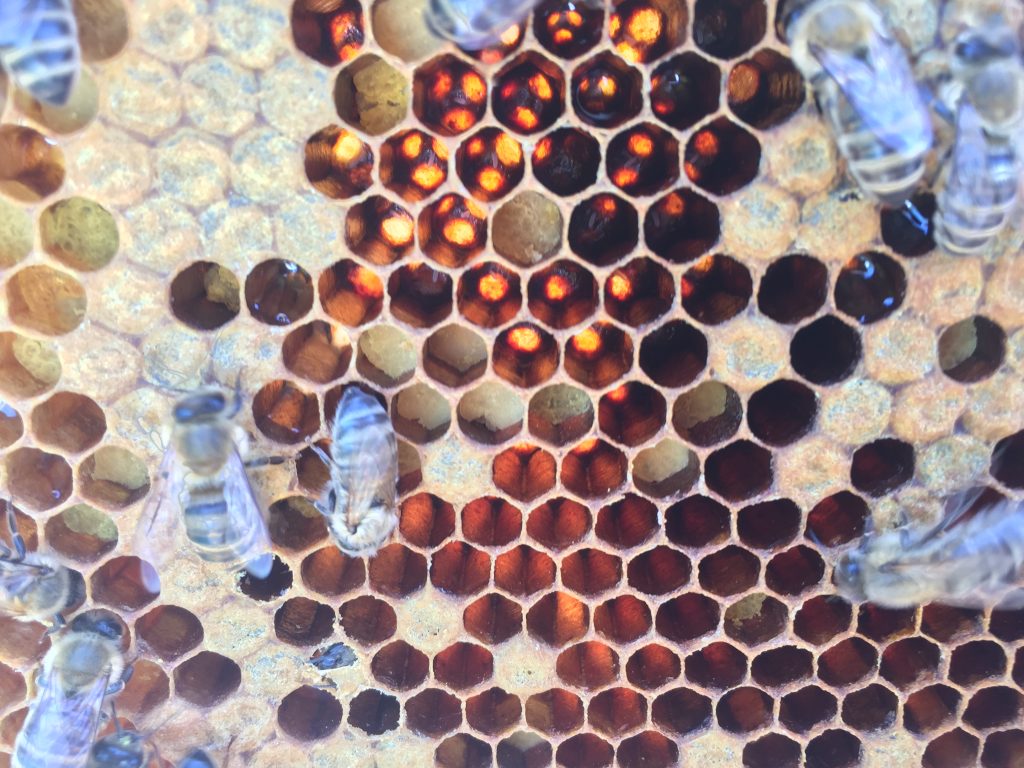 The biggest joy was looking at the photos afterwards and seeing a bee hatching (bottom left of the image above). Also, once back home, I saw eggs for the first time (top cells of the image below). No wonder I couldn’t see them before – they’re so tiny!

All in all, it was a good day, and I was beginning to feel more like a real beekeeper at last. 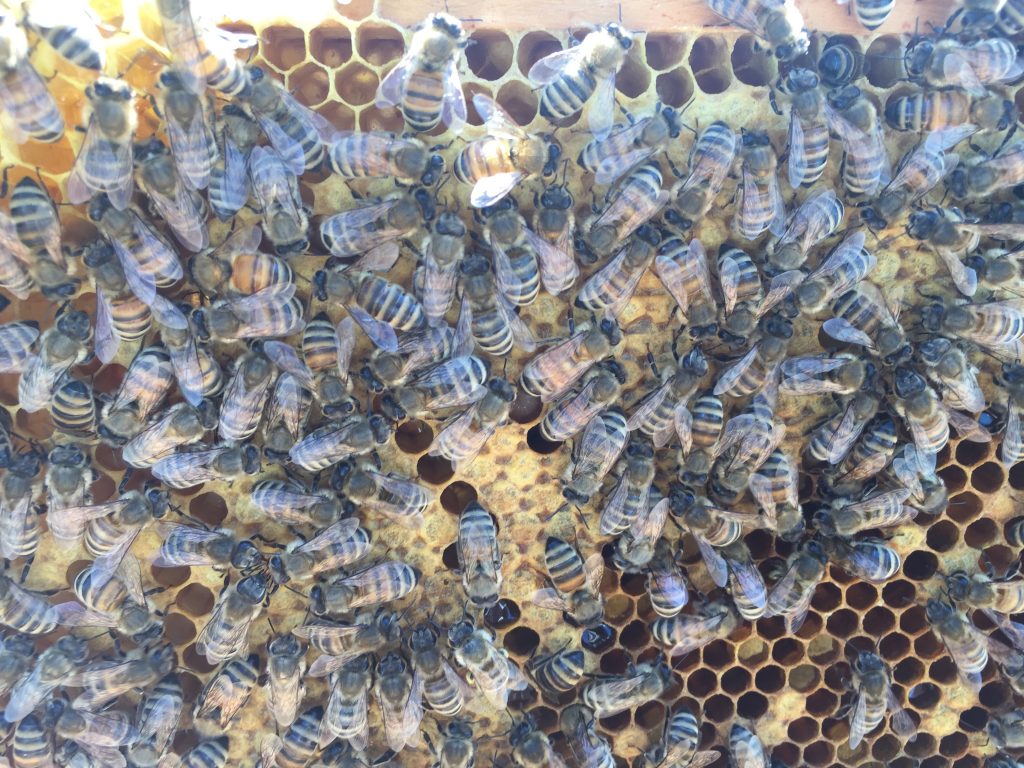 The next post is about sharing an inspection with family, and discovering some of them are becoming as hooked on bees as I am.