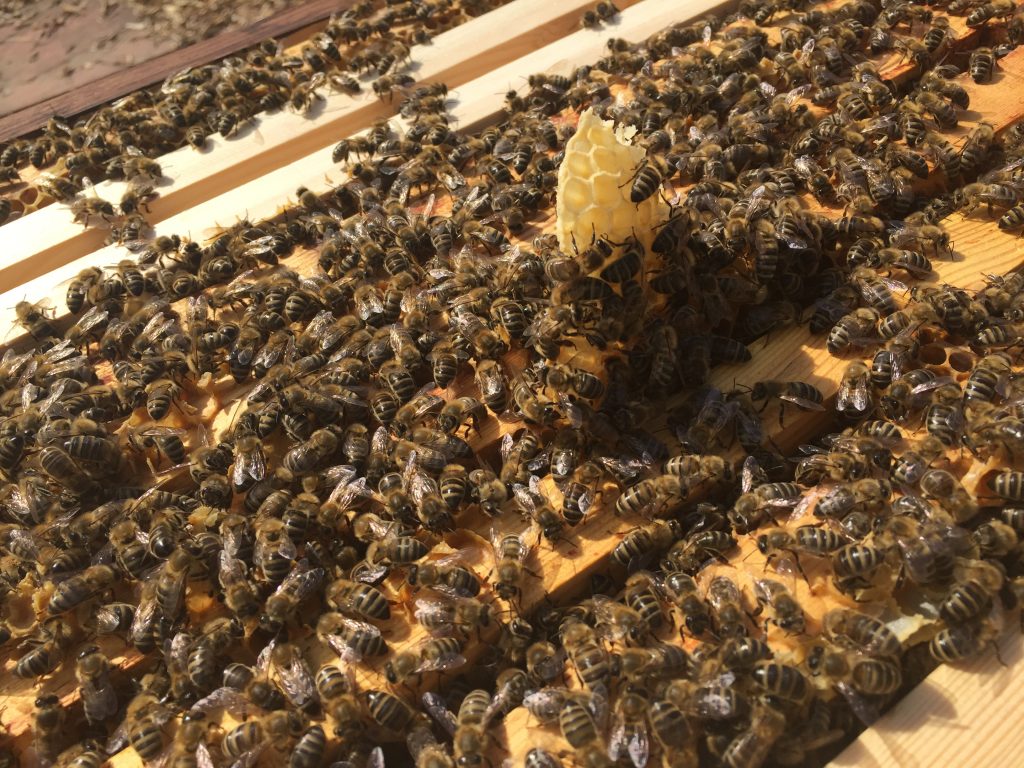 It still takes ages to get booted and suited. There must be an easy way to wear double nitrile gloves but I haven’t discovered it. Lighting the smoker is ok but keeping it lit? That’s another challenge. After days of sunshine, the temperature had dropped, while cold winds and rain were keeping the bees inside. I didn’t blame them but found myself worrying. Were they warm enough? Did they have enough stores? I needed to get in to look and fortunately, for my first solo inspection, the sun was shining again.

I thought the comb emerging through the crown board of the brown hive was amazing. Clearly, these are architect bees. Two weeks after transfer from the nuc, I didn’t interpret this as overcrowding, but more a case of healthy enthusiasm, in particular as it was directly over the centre of the brood box where all the activity was going on. 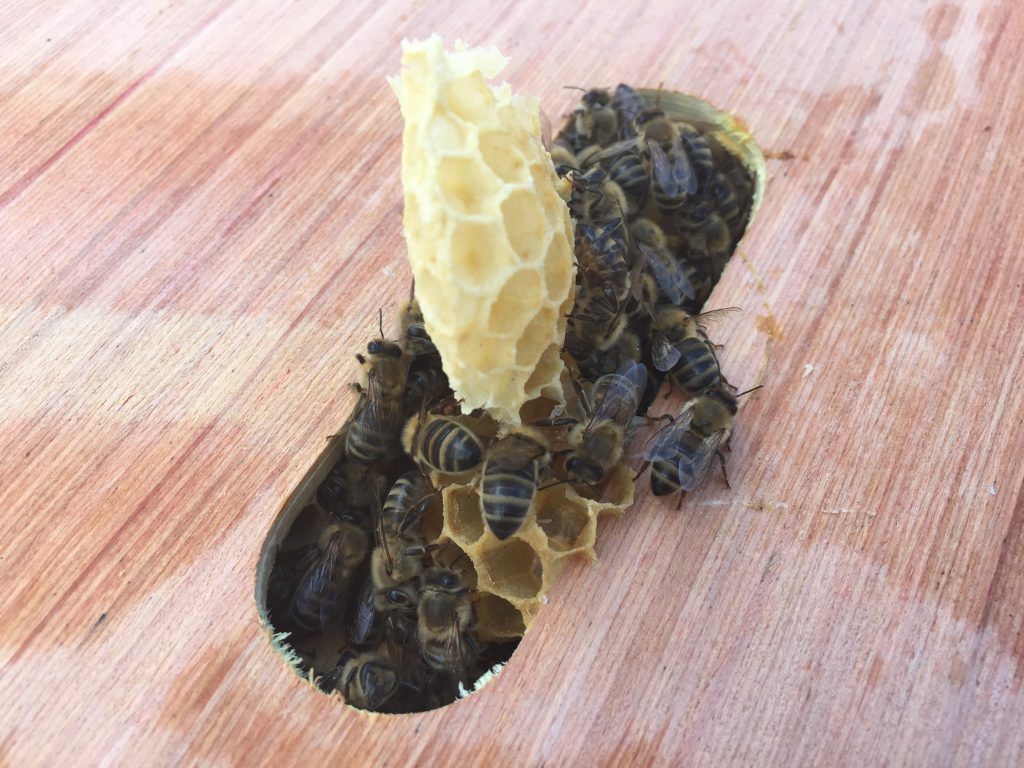 The brown-hive girls (cue Van Morrison) had been busy drawing out comb. There was shiny stuff in the cells but I wasn’t sure if it was nectar, or sugar syrup. They’d got through litres since the transfer from the nucs. I loved all the different colours of pollen and one  single cell of orange intrigued me. Why had the bees chosen that particular cell? Was it random or is there a mathematical relevance to the first one to be filled? Always, I walk away with more questions than answers. 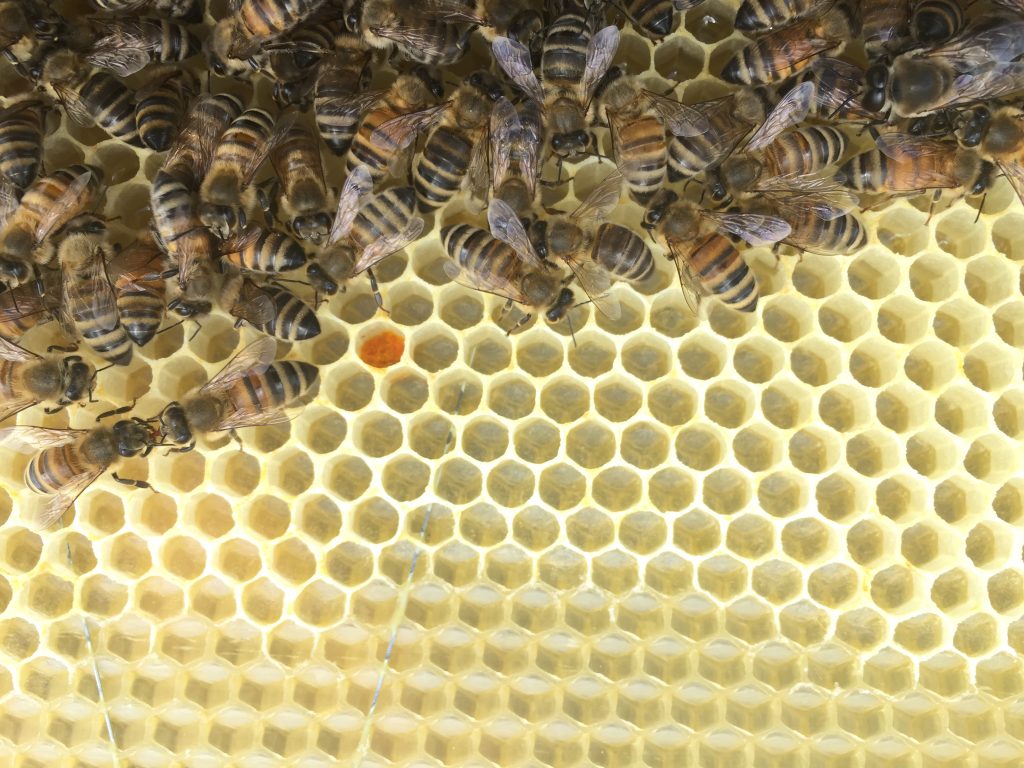 I saw capped worker and drone brood, and plenty of bees with pollen on their legs. The previous post described my problems seeing eggs and they were still elusive. Also, I couldn’t see the brown queen, despite having marked her last weekend. This was a surprise as I’d thought the green dot would make her easy to spot. 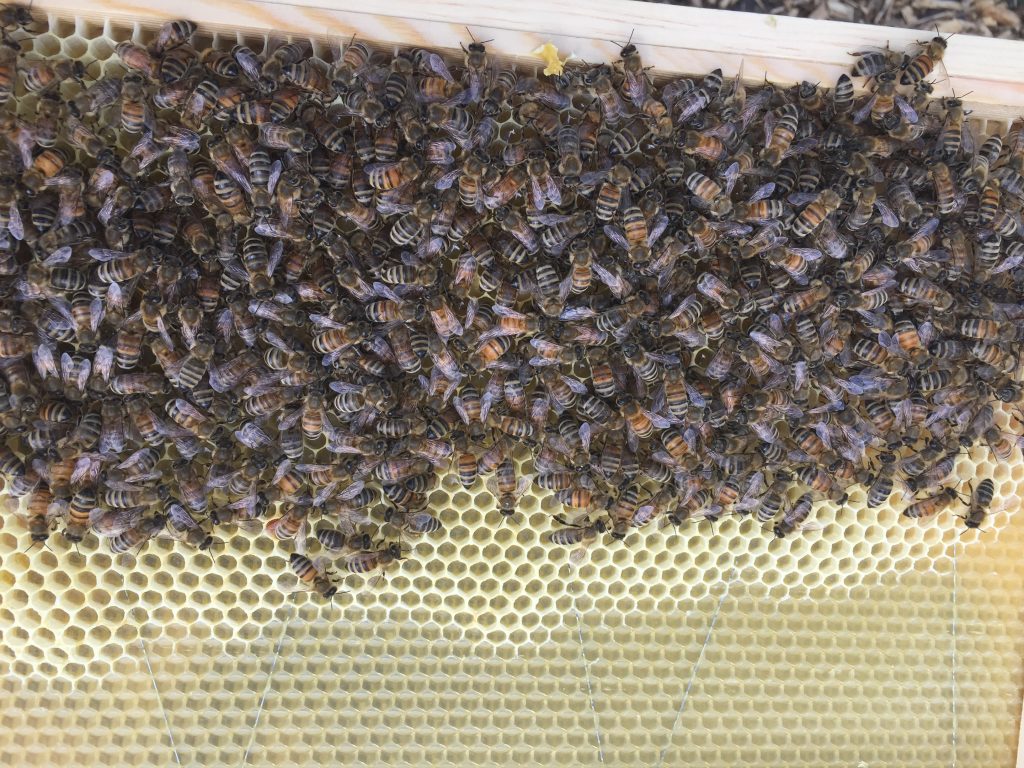 The pink hive looked similar with drawn comb on the new frames.  We’d positioned a nuc frame between two new ones and within a week the bees had worked the new foudation on both sides. Seeing this I had what felt like a good idea. If I alternated the full and empty frames, it would encourage the bees to spread out. I’d heard of ‘chequerboarding’ and thought this was what it meant, but afterwards discovered it was a swarm prevention technique in the US known as Walt’s Method. 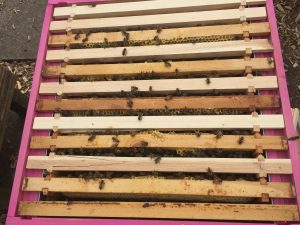 While the principle seemed the same, i.e. encouraging the bees to think there’s more room, I also realised I’d broken up the middle cluster or brood nest which was probably making it harder for the bees to keep the centre warm. If the outer frames of a brood box are usually stores, moving frames of capped brood there suddenly felt like a huge mistake. I had to fix it or not sleep for a week until the next inspection.

As it was still sunny, I went back in and quickly changed the frames back to where they were.  Phew! Then I watched a You Tube video where a UK beekeeper alternated his frames, just as I’d done, and broken up the brood cluster. This is so hard!

I’m learning there’s no set way of working. For a beginner this is difficult, at least for me. I’m used to doing research and finding set rules to follow. This is very different. The old adage is true. Ask five beekeepers the same question and you’ll get seven or more different answers. Every hive is unique, so decisions are based on evidence-based practice as much as theoretical knowledge, which is another reason why being able to ‘phone a (beekeeping) friend’ is so useful from the start. 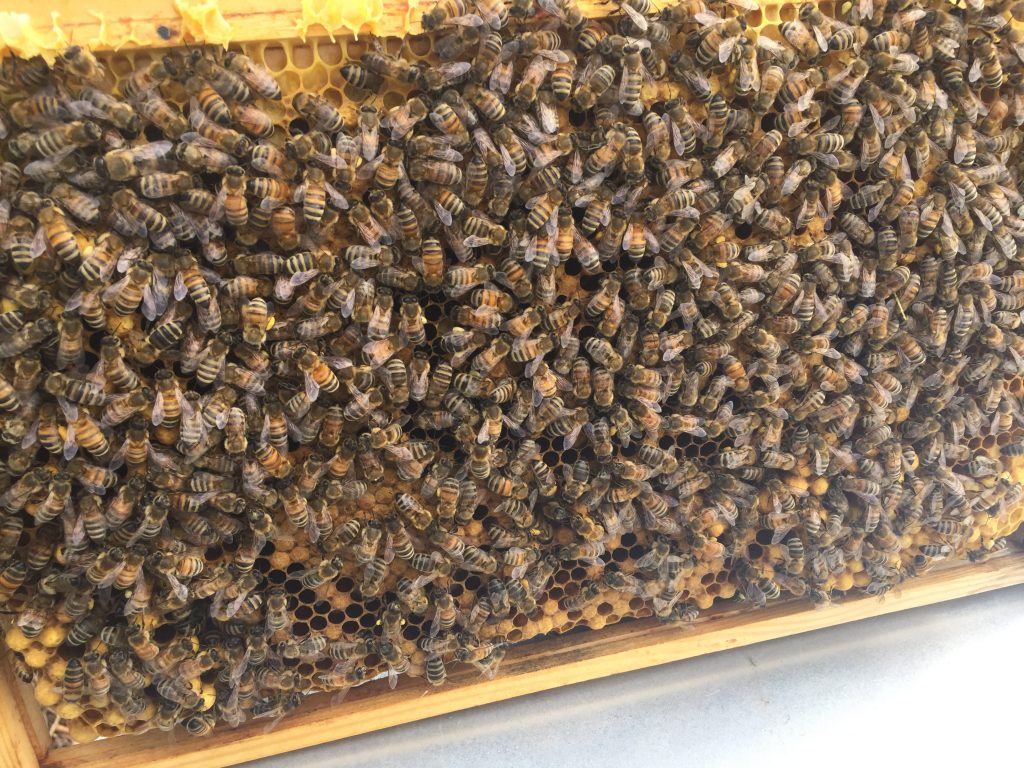 After the first solo inspection I felt disheartened but realised I was focusing on the negatives. By worrying over what I hadn’t done, like see any eggs or the brown queen,  I was forgetting the positives.

The bees were calm and quiet.

I was developing a more effective inspection routine with regard to position, and having everything to hand such as the smoker, hive tool, notebook and camera etc.

There was plenty of drawn comb, capped worker and drone brood, and I did see the pink queen. 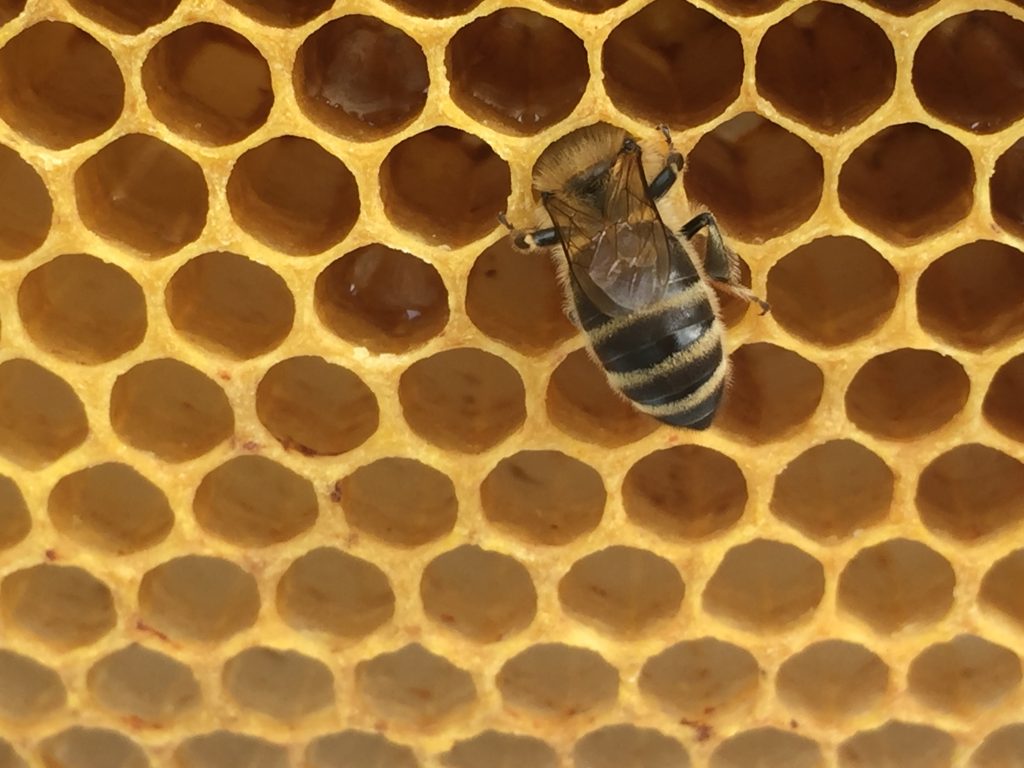 There were mistakes. I left the top off the feeder so by the end of the inspection a cluster of bees had gone for a swim and met a sticky-sweet end. Then there was the case of the repositioned frames where I simply ended up confused.

Overall, the first solo inspection was a mix of highs and lows, but the bees seem ok and everyone says to relax and let them teach me. Like my unsquare hives, and the occasional wonky  frame, this doesn’t have to be perfect. Besides, whatever I got right or wrong, I still get to do it all again in a week’s time. 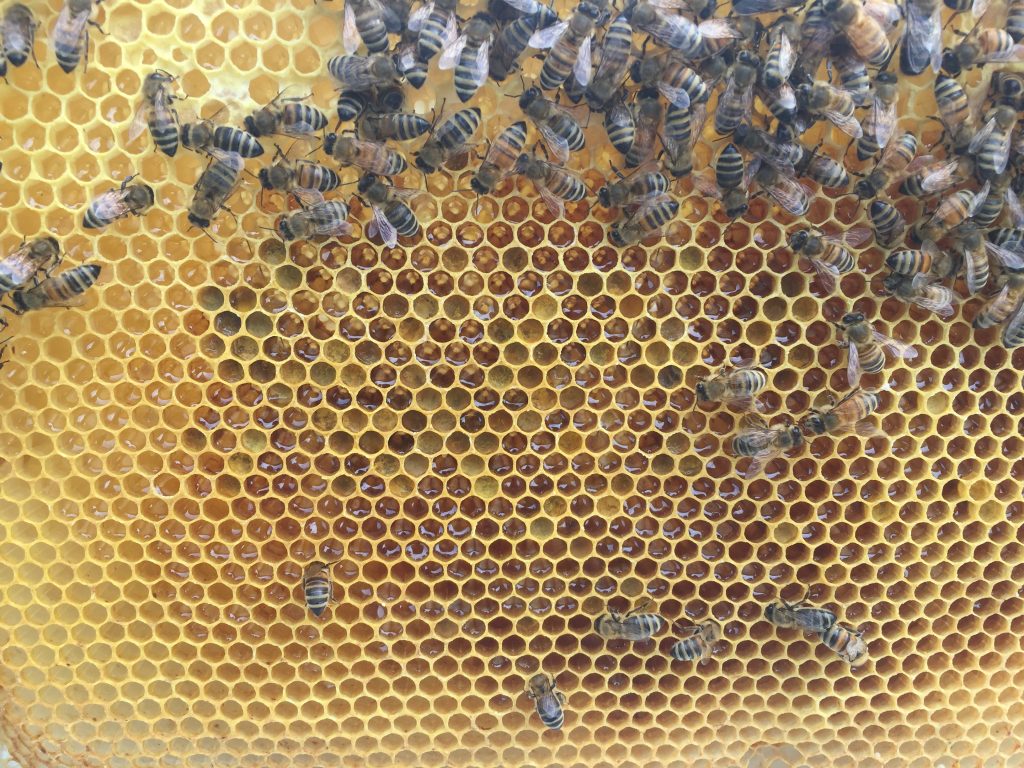 One thought on “First solo inspection”