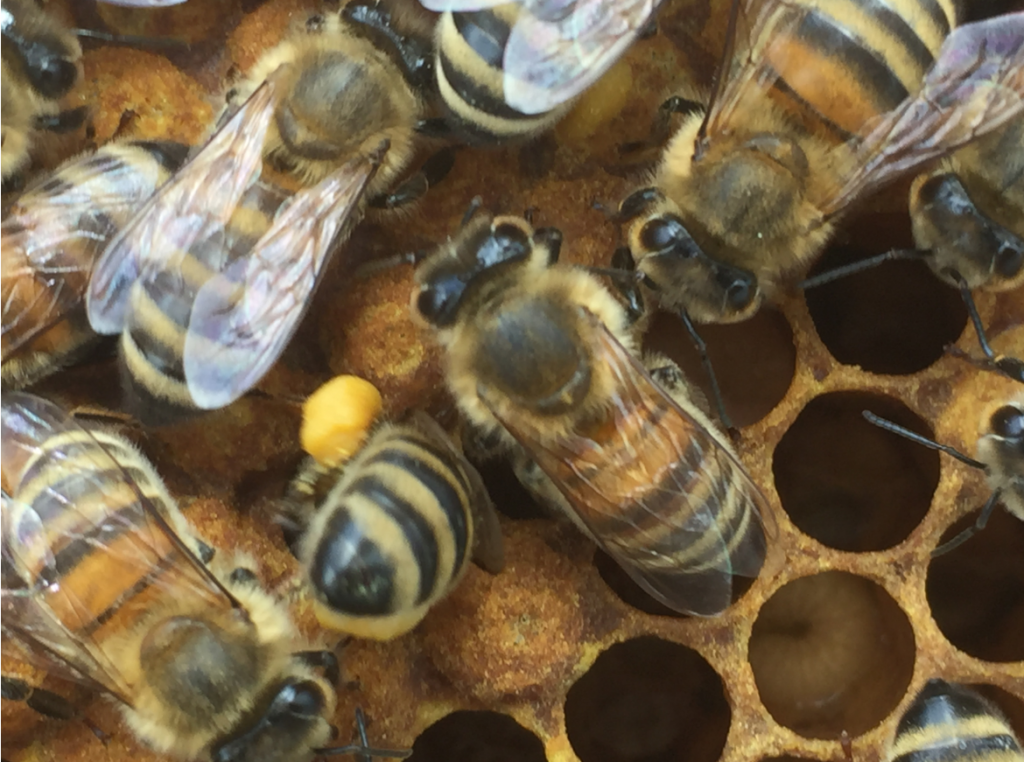 After the second solo inspection, I felt more confident.  The hives were looking well with capped brood and stores. I wasn’t seeing queens but had found eggs and learned they were the key sign of a healthy hive. It seemed a good point to invite family to get suited up and see first-hand what I’d been talking about non-stop for weeks.

From the beginning, it had been helpful to have observers. When the nucs arrived a stream of fellow plotters turned up to ask questions. Giving answers confirmed I’d managed to learn something after all.

The most frequently asked questions included how far and high do bees fly (research suggests between 3-5 miles/5-8 km, with a cruising altitude of up to 30 metres/100 ft), how do they make honey (evaporating moisture within nectar by fanning their wings) and what flowers do bees like best (those with open petals for easy access to pollen like brambles, borage and calendula).

The guaranteed question every time was had I been stung. 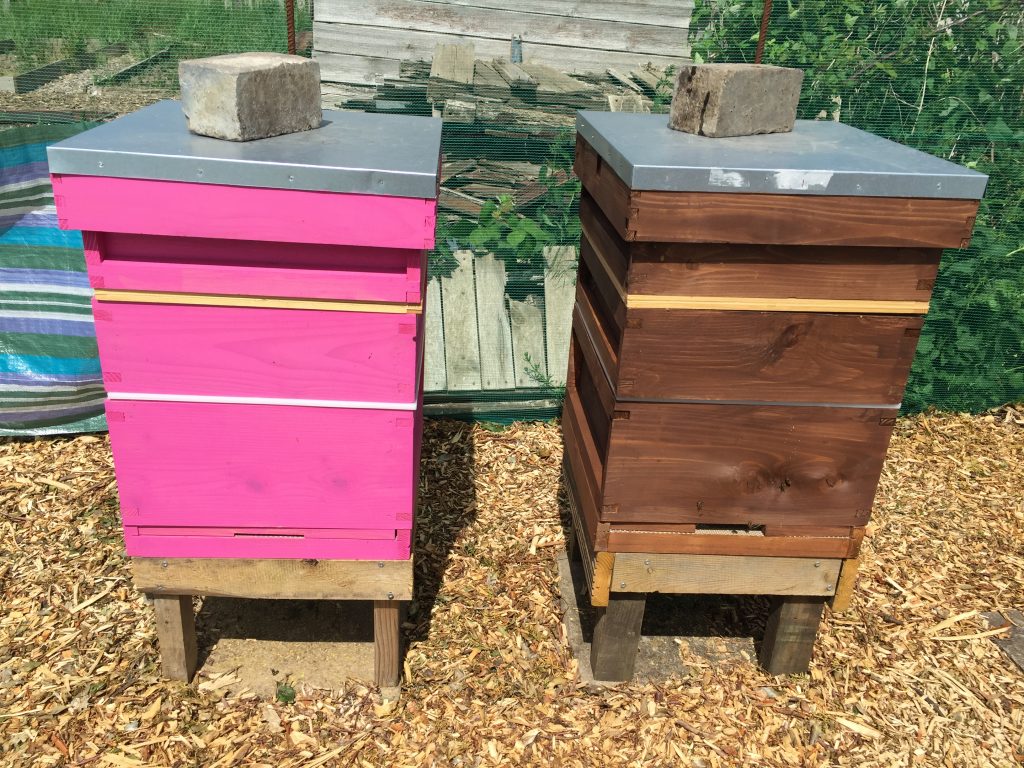 My bees seemed incredibly calm and unbothered by intrusions into their space. A couple of times I’d gone into the apiary area to fetch or tidy something without getting suited up, and progressed to lifting roofs to check syrup levels. There’s lots of videos on You Tube where beekeepers have bare hands and limbs, and although I’d already noticed the pink hive could be a bit more lively than the brown, neither showed any signs of aggression. Looking back, I think I became over-confident.

It was one of those chilly, wet mornings between long days of sunshine when I did a quick feeder inspection. Few bees were flying, so it was probably a guard bee which shot out of the pink hive entrance and stung me at knee height through my leggings. An inch lower would have been bare skin, so although the stinger went in and I felt pain, the material provided a barrier.  I could gently pull the stinger out, still attached to the bee, which flew away.

I hoped it felt grateful and would remember me next time.

Now when fellow plotters ask if I’ve been stung, I can say yes, and it’s sharp like a hot needle. Also dousing the sting area with cold water (a trick learned from You Tube) really does help.

With my first sting, I felt even more like a real beekeeper but it was a timely reminder of the risk of going in uncovered. I insisted on top-to-bottom protection when family came to visit.

It’s been a year since the first time I stood suited and booted in an apiary, with tens of thousands of bees flying all around. I thought it was awesome, and still do, but even more amazing is I’m now the one introducing bee experiences to others.

The best way to learn something is to teach it to someone else. I probably learned more in that first session with family than all the previous weeks put together, and it was lovely to see their enthusiasm. 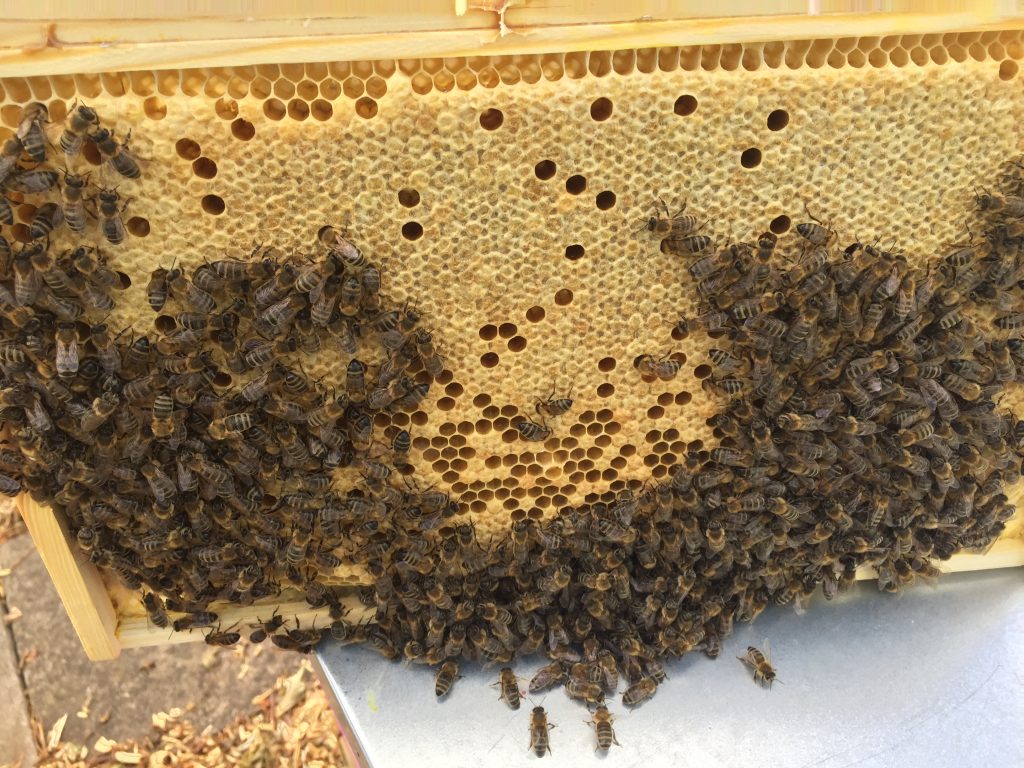 Apart from the advantage of having someone hold a frame up to eye level while you take photos, or spread a bit of smoke when you have your hands full, the process of explaining what you’re doing and why you’re doing it really consolidates your knowledge. Also, a second pair of eyes is very useful for spotting things you might otherwise have missed.

The hives seemed in great condition. New frames had been drawn with lots of capped brood. Considering this was only their third week, I thought they were happy with good laying queens and foragers. 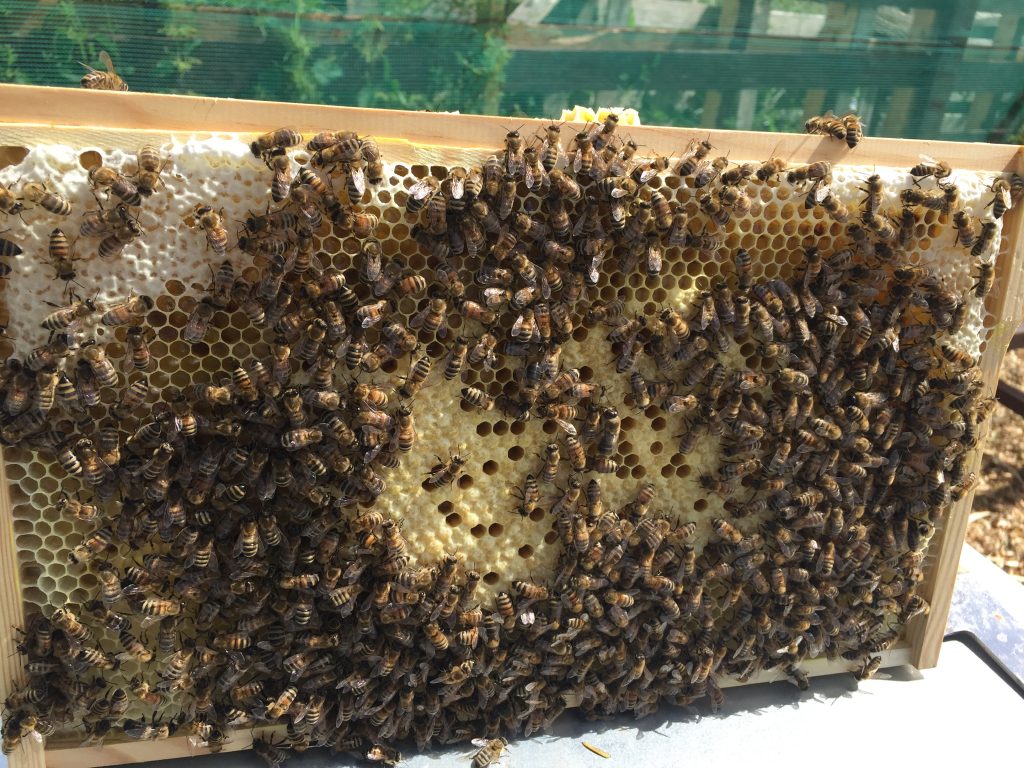 The outer edges of the frames were filling up with stores. There was lots of pollen and nectar, with capped honey on the outside of the brood frames. 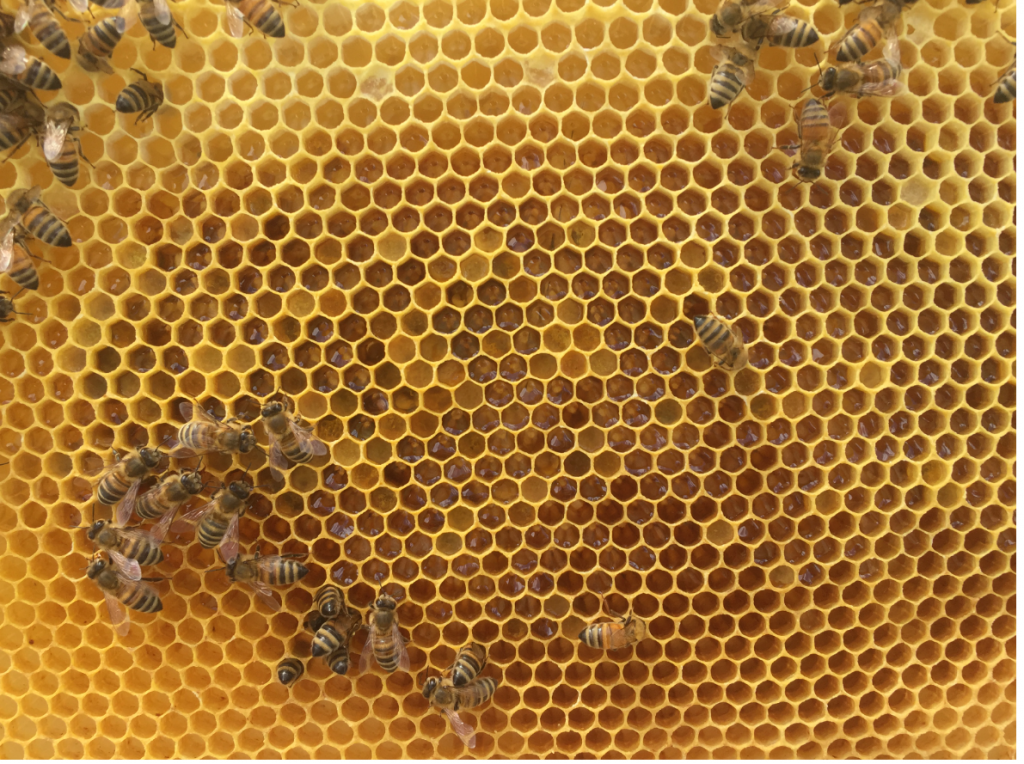 I took my first video of the bees. I was loving the photos, but having video to watch was even more amazing. I’m not sure if it’s sad, or if everyone does the same, even if they might not admit it, but there’s something really relaxing about sitting at home at the end of the day, and still watching the bees go about their work.

The more you get used to being around an open hive, I think it’s important to remember the first time can be a source of nerves. Cultural conditioning which associates bees with getting stung runs deep. There’s also a natural fear of the unknown.  The following weekend, more family visited and I overheard one saying to the other ‘Put the suit on, it’s really worth it and you won’t regret it.’

That was good to hear. I think I’m making my first conversions and it’s definitely a case of keeping it in the family.

The next post will be looking at some of the practical lessons I’ve learned during my first month as a beginner beekeeper.

After that, the problems really start so watch this space!