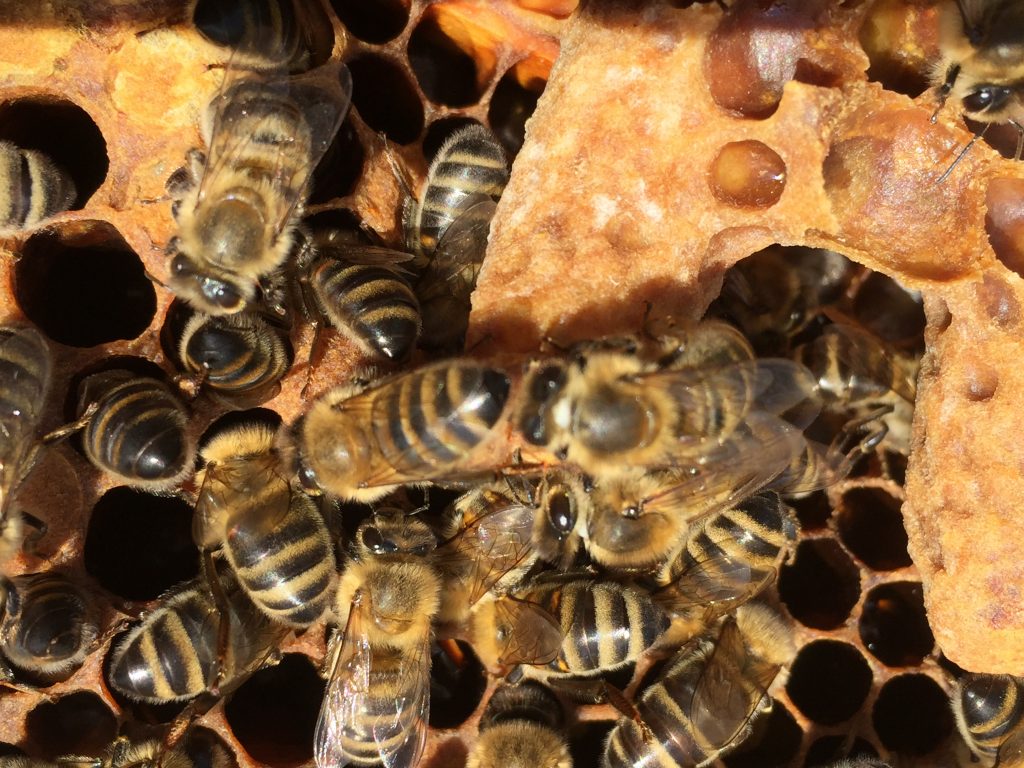 The brown hive girls swarmed at 11.00 a.m. on a hot sunny day.  Looking back, they’d been warning me of their imminent departure in a number of ways. There’d been the presence of queen cells, sudden increase in capped brood, post-swarm flying activity, and a frenzy of excitement just before they left. I missed the significance of every one of these signs.

The swarm created great excitement on the allotment, although it was hard to tell if the descriptions were accurate or exaggerated for dramatic effect. After all, allotmenteering is a relatively uneventful occupation. I was just wishing I’d seen them. It felt doubly dire to lose half a colony in only five weeks, never mind missing what everyone seemed to agree was an amazing sight.

My knowledge of swarming was limited, but I expected the bees to head towards the trees bordering the allotments. Here they’d cluster and hang for a day or so to recuperate and decide the final destination. 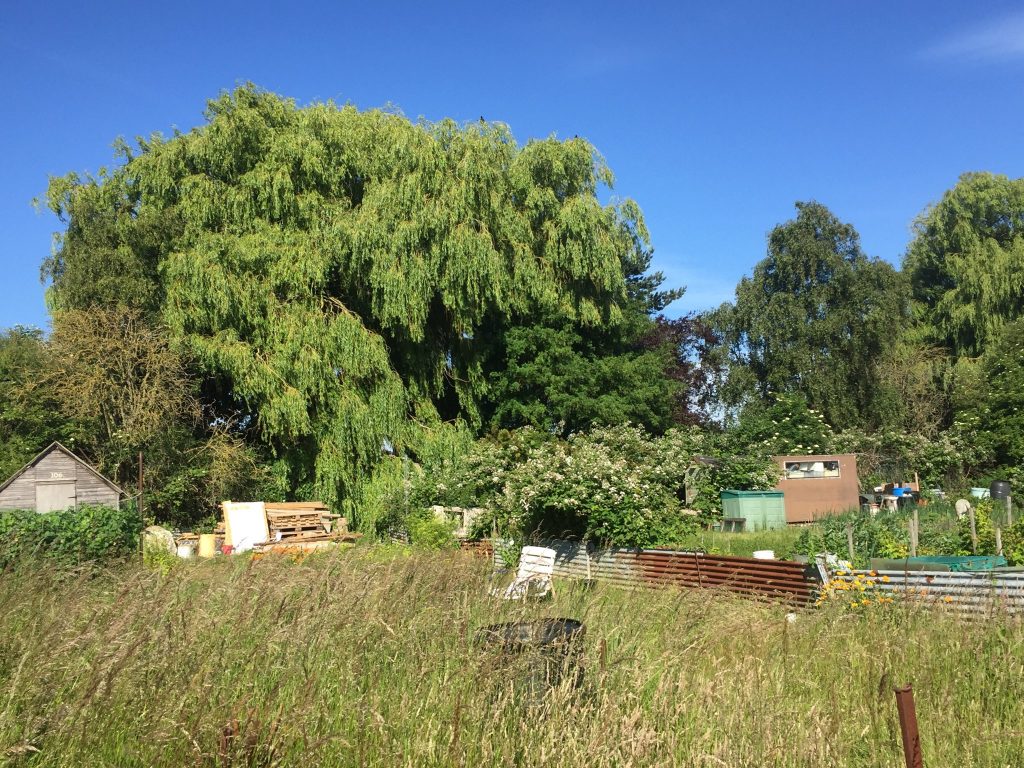 I began a swarm search, with a number of volunteers, who seemed more concerned about the state of the bees than any state I was in! It was as if the bees belonged to the allotment community and everyone wanted to be reassured they were okay. My fellow plotters had lots of questions. I could answer the ones about clustering and hanging but made a huge mistake with regard to sound because I thought we’d be able to hear them.

Bees are rarely quiet. Whether it’s the soft buzz of a happy hive, the excitement of a thousand bees flying around the apiary on a sunny day, or a sharper fizz when they get annoyed, they’re always making a sound. I thought my primary weapon of detection was my ears, but this was wrong. A resting swarm of bees is silent. It makes sense. Why would they attract a predator, or give an upset beekeeper a clue to their whereabouts?

With no sign of them, that day and the next, I eventually admitted defeat. The bees had gone.

An inspection of the brown hive revealed more clues. Although I’d taken out a large queen cell the day before, I’d missed several others. It hadn’t occurred to me to shake the bees off the frames for a closer look, mainly because I wasn’t thinking swarm-related thoughts.

There were play cups hanging from the bottom of a frame, alongside what might have been a capped queen cell, but it seemed small and wasn’t hanging down. It could have been an extra large dronebut didn’t match anything in the books, and I’m still not sure, so any suggestions would be welcome.

I also found charged queen cells. These contained larvae destined to be queens. They weren’t yet capped but were further evidence the bees were ready to go.

The 50% of the colony left behind had to raise a new queen in order to survive. A few days later, I checked for development. The queen cells were now capped and looking healthy, so it was a case of closing up the hive and leaving them alone for several weeks, while the queen hatched, went on her mating flights and started laying eggs. 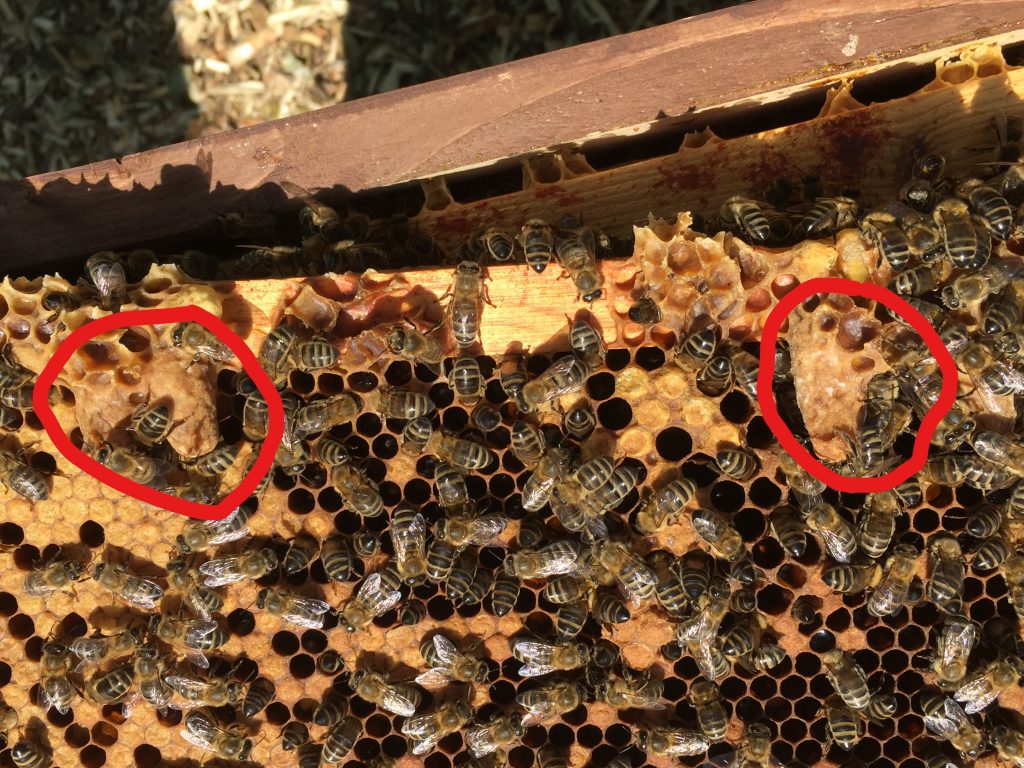 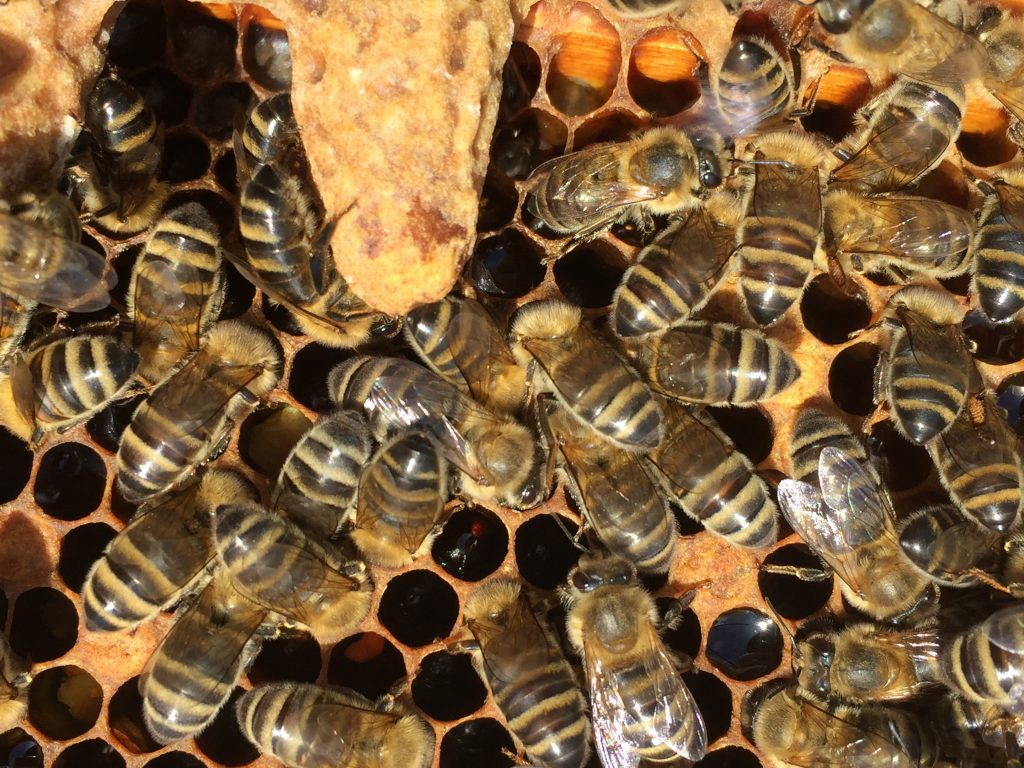 I had so many questions.

How many queen cells should I leave in the hive? (I left all of them but opinion is divided and there’ll be a blog post about this later in the year)

When will the queen hatch? (@8 days after capping, but you can’t be exactly sure when capping took place)

How long before she gets mated? (@2 days after hatching, and there might be several mating flights over a number of days)

When does she start laying eggs? (@2-3 days after her last mating flight, but you can’t be sure when this was)

As you can see, it’s not an exact science, but the calculations must be right.

If you return to the hive too soon,  there’s a risk the queen could be damaged. She might be out on a mating flight, and not come back because of your presence, or you could, heaven forbid, dislodge and lose her while you’re inspecting the frames.

If you leave it too long and, for whatever reason, she hasn’t hatched or come back from a mating flight, the hive (now queenless for some time) is at risk of dying out through lack of new brood.

I used Wally Shaw’s free online guide titled There are queen cells in my hive – what should I do? and decided to leave them alone for 28 days.

I’d only been a beekeeper for five weeks and after the swarm, my confidence levels were at rock bottom. Losing the bees felt like a failure, but with the pink hive also filling up, I knew I couldn’t risk it happening again. Once is a mistake, but twice is careless so the pressure was on.

I prepared to do a split. This involved taking half of the frames (pink) and putting them in a third hive (green) to create more space. To do this, I needed to find the pink queen, but on the day of the split, there was no sign of her. Could it get any worse?

The next post will cover the search for the pink queen, the split which failed and what happened next.