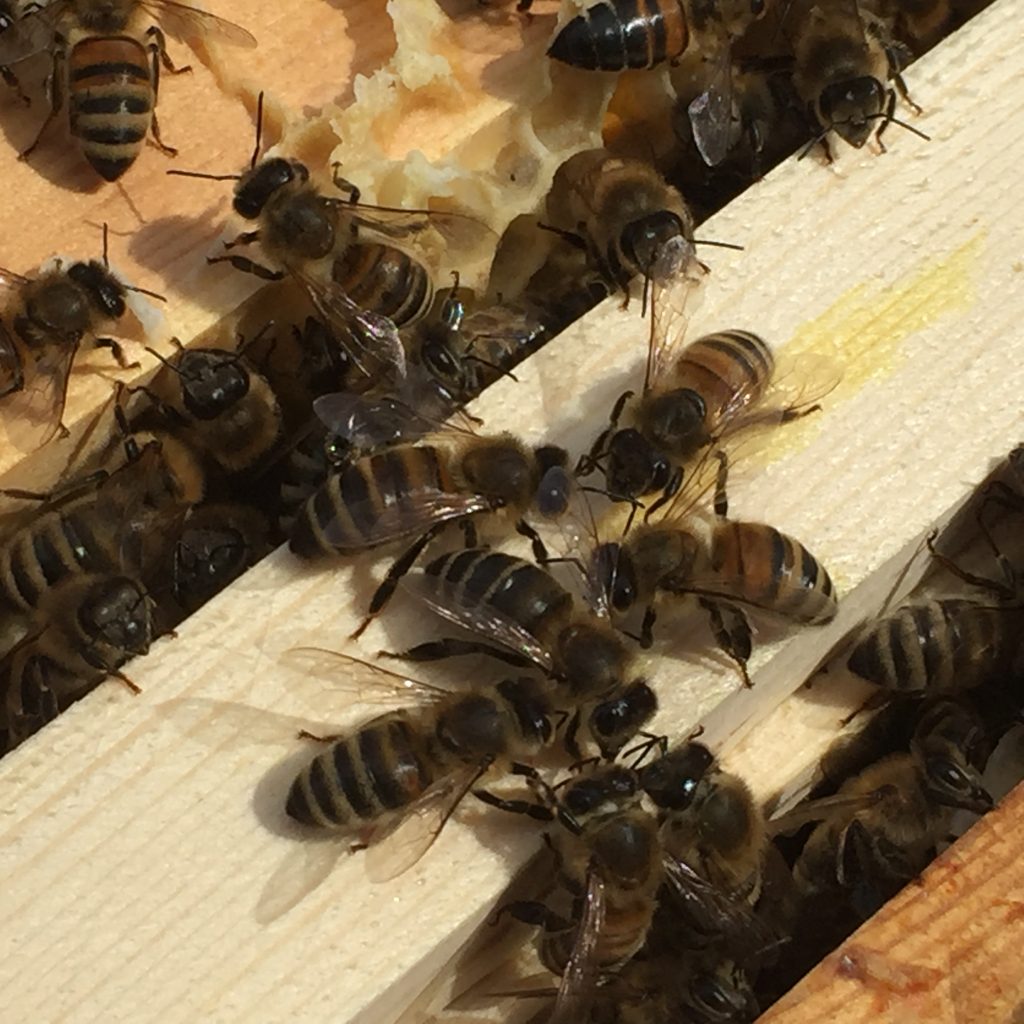 I’d lost half the brown hive girls to a swarm, and needed to avoid the same thing happening to the pink hive. Swarming is an instinct. It’s a natural response to overcrowding so one way to ‘manage’ a potential swarm, is to create another colony through a ‘split’ or ‘division’. Enter the green hive.

There are different methods for splitting a colony of bees. Of course there are. Nothing in beekeeping is simple!  My plan was to use the Pagden Method, also known as a ‘swarm control split‘. This involved sharing frames out between the pink and green brood boxes.

I had queen cells, which was no surprise as the pink girls were not far behind the brown in terms of expansion. I needed to identify the queen, who would stay in the pink hive, while frames with queen cells would become the basis of a new colony. Both brood boxes would have frames of wax foundation, which the bees would draw out to make new cells for the queens to lay in.

Ideally, I would have used comb which was already drawn, but as a new beekeeper I didn’t have any. There seems no limit to beeky tools and gadgets to buy, but drawn comb is not available. I’m not sure why. If flat foundation can be manufactured, why not sheets with deeper cells too?

On the morning of the split, I moved the pink hive to its new position, leaving the green brood box in its place. This confused the pink foragers returning from their morning flights. Bees have an internal ‘sat nav’ which takes them back to the exact position they left. It was clear something had gone wrong. The disruption was only temporary, but I felt bad seeing all the confused bees who’d followed correct coordinates but not found their way home.

The next step was to identify the pink queen.

Although she was marked, I’d rarely seen her.

She was the shy kind who hid whenever you lifted the roof, and this day was no different.

However, Patrick had (quote) ‘a fool proof method’ for finding elusive queens. Following his advice, I split the frames between two brood boxes, positioned them in pairs, and put queen excluders on. The next step was to have a cup of tea or do some weeding for half an hour.

Afterwards, if you open each pair of frames like a book, the queen should be visible on the inner side, where she’s trying to avoid the light.

With sinking heart, I called Patrick again. He suggested more tea or weeding, but to no avail.

I’d been a beekeeper for six weeks. One colony had swarmed and now the other one appeared to be queenless. Feeling upset was an understatement, but with confused bees clustering around the green brood box, becoming more agitated as the morning wore on, I had to move quickly.

The only viable option was a Walkaway Split which can be achieved without a queen. It involved dividing up the brood, stores and queen cells. Patrick made it sound easy, but telling me to leave enough nurse bees to care for the brood was a problem. To be honest, I had no idea how to identify a nurse bee. Apart from male drones, all female workers still looked much the same.

At least I knew where I was with the queen cells.

Their presence confirmed the hive was queenless, but as well as around the frame edges, where I expected them to be, they were also in the centre. I thought these looked more like supercedure cells, the bees’ emergency response to being queenless. Was it possible to have both? I hadn’t seen central queen cells before. As I finished putting the hives back together, I felt as confused as the pink bees, still trying to work out where their home had gone. It was all a bit of a mess.

The subject of queen cells needs a blog (or three!) of its own, and the plan is to write about them during the winter. Suffice to say, I was wrong and these were all ordinary queen cells (if anything in beekeeping can be called ordinary). 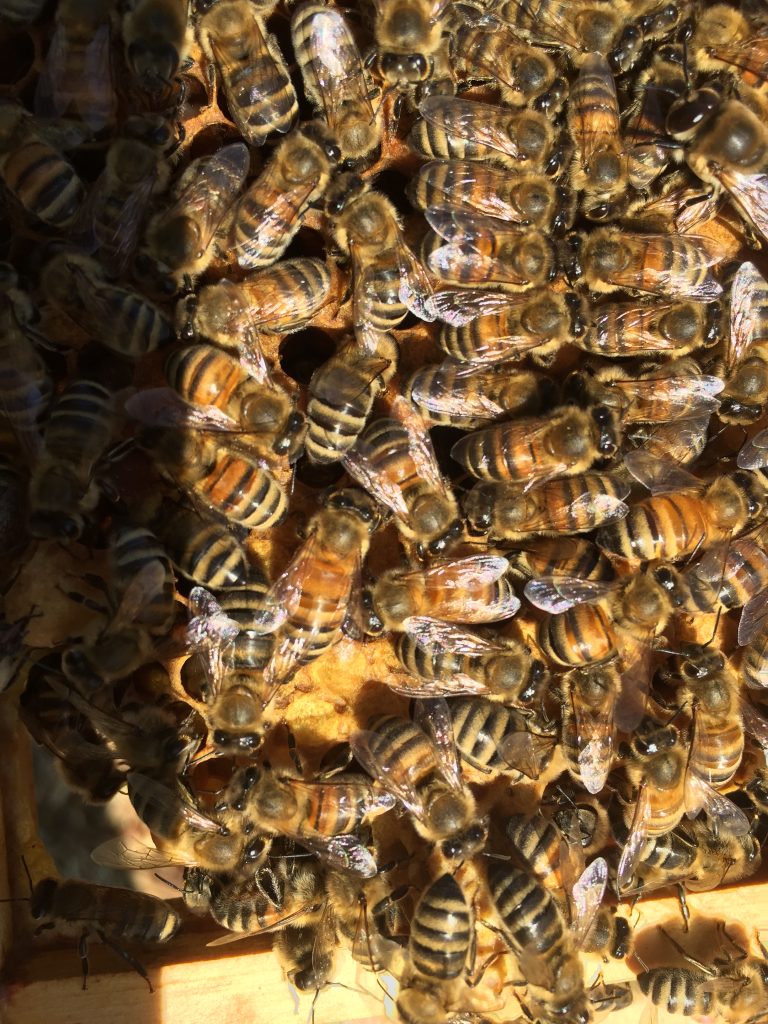 It was now a waiting game.

The brown hive was off-limits because it was raising a new queen after the swarm, while the pink and green hives also had to be left alone for two to three weeks. This would give the queens chance to hatch, go on their mating flights and return to start laying eggs.

I didn’t feel good. In six weeks, I’d had a swarm and lost a queen. The learning curve was continuing to rise and although I still loved the bees very much, my confidence was at an all-time low.

The next post will cover inspecting to check progress. There was some happy news and some less so, but for the time being I had three active hives and my apiary was looking good. 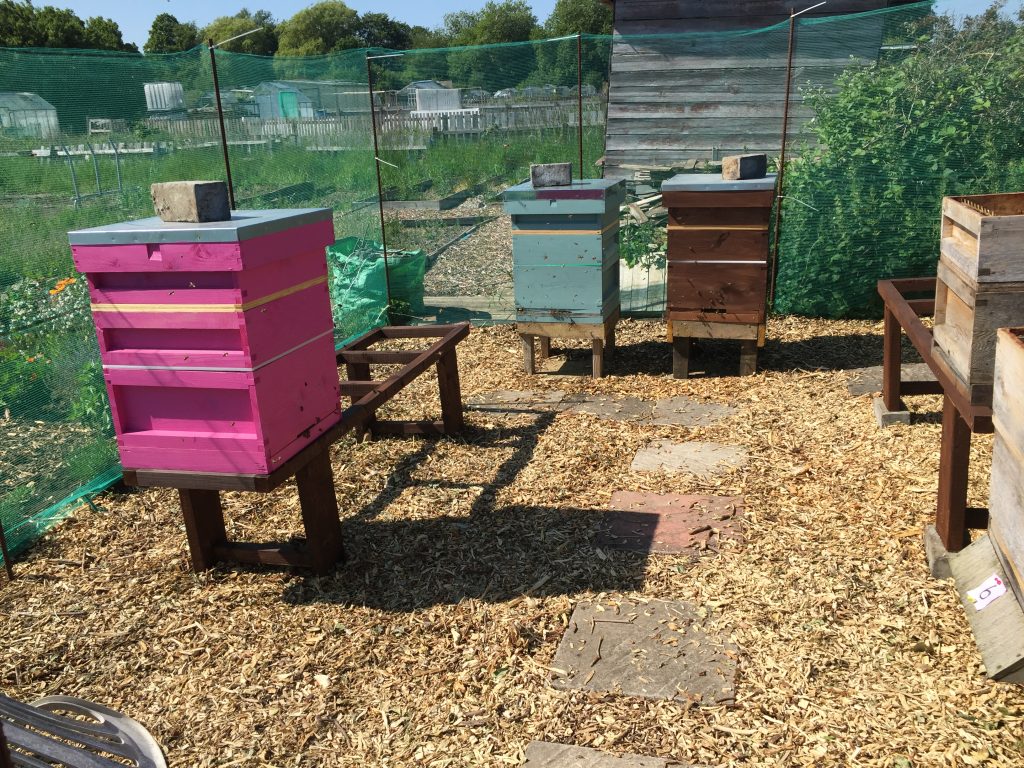