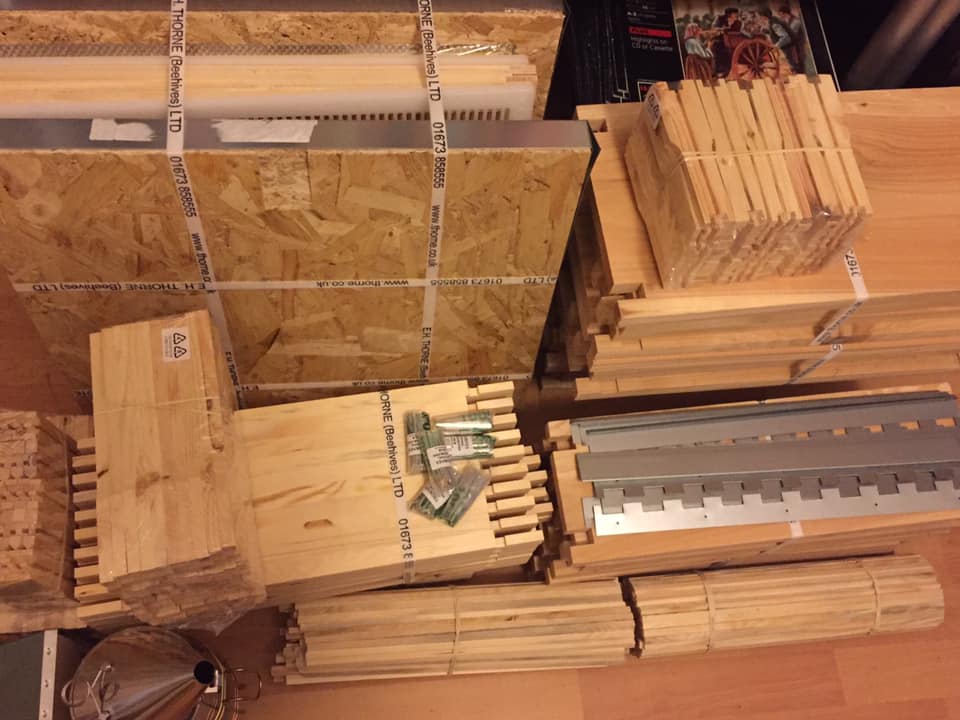 I bought two flat-pack British Standard hives. How hard could it be? I soon found out that as a novice woodworker, DIY hives posed a challenge.

What looked straightforward in the online videos was less so in reality. The nails went in slant. Tiny panel pins for the metal runners were smaller than my fingers, resulting in bruised nails and first blood. Finding a hints and tips  video showing ways to hold them was a revelation – as many simple solutions are! Boosted by the success of a completed brood box I turned to the supers. Why are they called this?

Always with an eye on cost, I’d opted for a budget kit but had followed the superior construction video. Puzzled as to why my side pieces didn’t have a groove for the castellated strips, I found the video for the budget hive – but it didn’t help much.

The video showed the four sides being glued before knocking in the bracing bars. Every time I knocked in the third or fourth bar, the sides fell out. After the third attempt I left the glue longer, then added the bars, but it wasn’t square and the inner pieces weren’t flush. By then the glue had set so it was a case of knock it apart and go back to stage one. Firing in a brad nail to hold the sides in place helped and eventually I achieved more or less square corners. 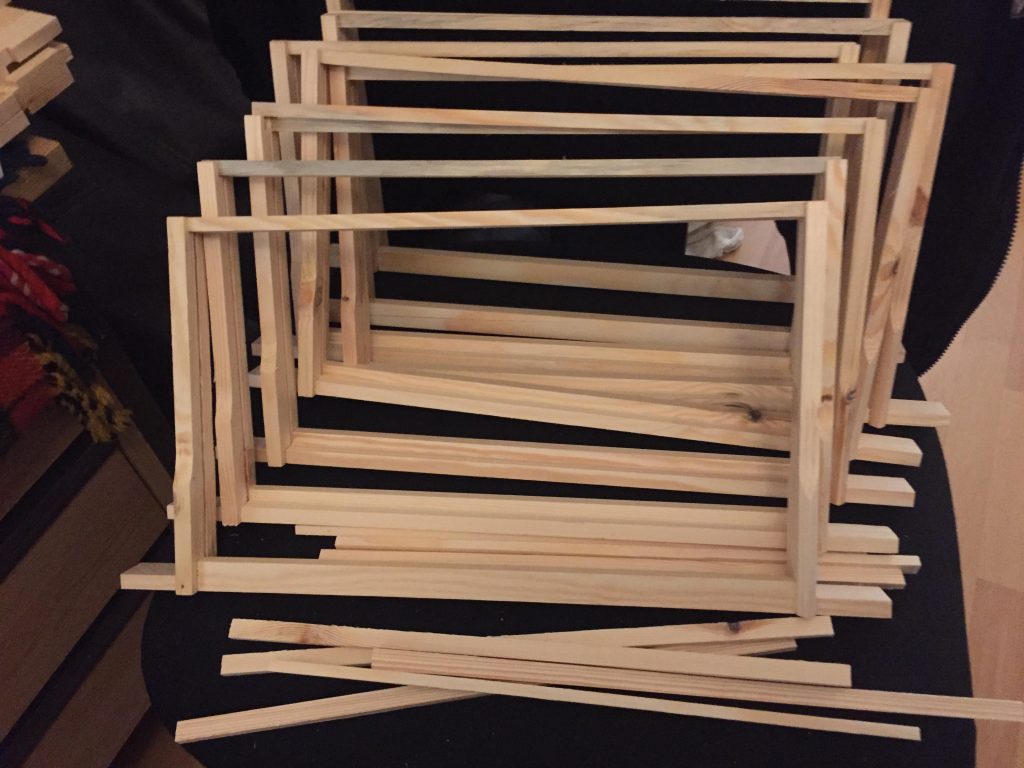 Onto the frames… these slotted together easily and I felt really proud but it didn’t last. The 1 ½ inch nails came out through the sides so I tried a staple gun. They went in fine on a test plank but in practice, holding the flimsy frame and balancing the gun with sufficient pressure defeated me.  I tried slightly smaller nails with some success, and showed a completed frame to a more experienced beekeeper friend. They suggested putting the foundation sheet in first. Nowhere had I seen this yet it now seems obvious! Fortunately I’d only fastened one frame and not all of them so it was fairly easy to take them apart and start again. 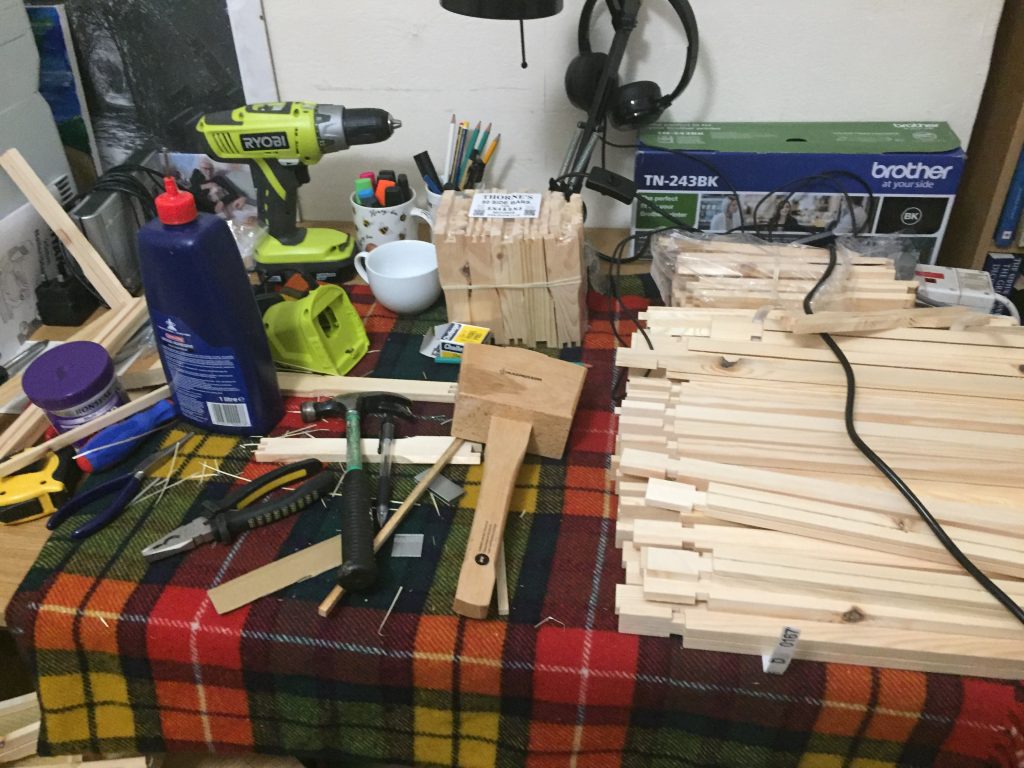 Having no workspace was another challenge. My living space became a hive manufacture assembly line. The flat packs, which had sat comfortably in the corner for months, took up a lot more space when taken apart. My desk was the worktop, while constructed frames balanced on the chair and completed boxes lined the hall. 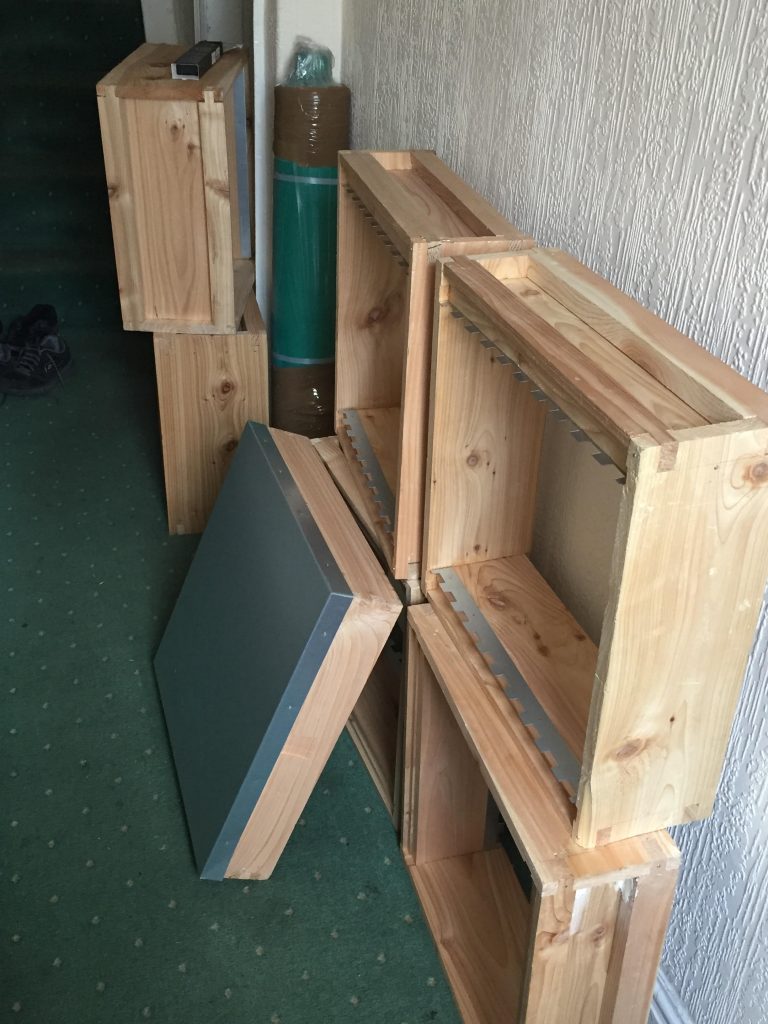 DIY hive building reinforces how you don’t know what you don’t know and there’s no shame in that. Working with wood was new to me and, being fiercely independent or stubborn (depending who you talk to), I imagined myself saying ‘if I can do it anyone can’ but I soon realised I needed a bit of help.

There’s something really special about the beekeeping community. They enjoy supporting newbies to get started. No matter what the problem, someone will have an answer and won’t think any less of you for asking.

I wanted my boxes and frames to be perfect and it didn’t happen, but I’m hoping the bees will make the best of what they have. When they finally move into their new home, they’ll find sort of square corners and almost flush edges. I did my best and settled for that. Now only time will tell! 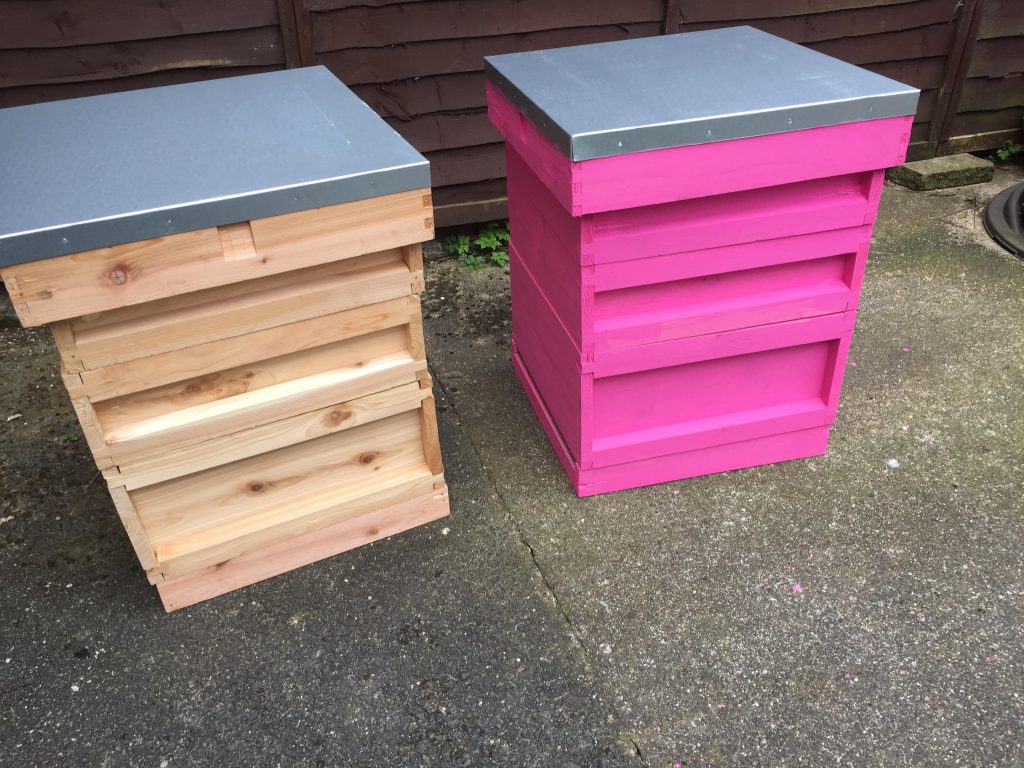